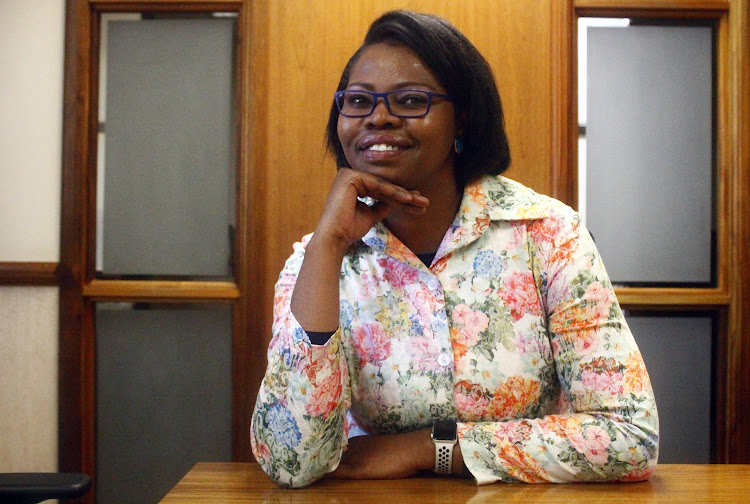 Mmabatho Maboya has recently been appointed as the CEO of the Cyril Ramaphosa Foundation, which aims to improve education and schooling conditions through its adopt-a-Project initiative.
Image: KABELO MOKOENA

Mmabatho Maboya has come a long way, from working on the shop floor of a computer company to being at the helm of the Cyril Ramaphosa Foundation (CRF).

The 35-year-old mother of two boys was named the new CEO of the foundation, a job she landed after many career changes in her life. Maboya replaces Donne Nicol, who had been CEO since 2015.

We met Maboya at the foundation’s plush offices in Sandton. We had to wait a while as she concluded her morning meetings for what was supposed to be a 30-minute interaction.

Maboya is passionate about supporting disadvantaged communities and black entrepreneurs and this became evident as our interview with her progresses.

She has changed careers many times in her life, always moving into a space that would give her what she loves the most – working with people and finding solutions that last.

Born in Mamelodi, in Pretoria, Maboya completed matric in 1998 and then went to the University of Free State to study towards a Bachelor of Science (BSc) degree majoring in statistics and geography.

She had initially wanted to study agriculture, but did not enjoy certain aspects of the course. “In my first year I did a BSc in agriculture majoring in food science, but then I hated the laboratory, chemistry and all that, so I switched to geography,” Maboya says.

Taking this career path would become crucial ingredient for the executive that she has now become.

In 2002, she secured a job at a manufacturing plant in Pretoria that produces computer boards. Her task at the plant was to find ways to optimise product manufacturing.

Maboya spent two and a half years at the firm. In 2005, she joined the Ngwathe municipality in the Free State as operations manager responsible for water. There, she was able to use the knowledge she had gained studying geography as she had to deal with many environmental issues.

We have been shocked by the sad news of the sudden departure of Prof Bongani Mayosi.
Opinion
3 years ago

#MelaninMagic: The CEO of the Sports Science Institute is a black woman!

Dr.  Phathokuhle Zondi is at the helm of the Sports Science Institute of South Africa.
S Mag
4 years ago

Nomzamo Mbatha on graduating: I wore a face of failure for a long time

As is the nature of working for municipalities, Maboya had to learn to deal not only with environmental factors, but also with communities living in the municipalities.

Working with people was a fulfilling experience and it therefore was no surprise that she later joined Eskom as a stakeholder management senior adviser, liaising with communities where Eskom was building its power stations.

In 2014, she moved to Ramaphosa’s Shanduka Group as stakeholder manager. She later moved to its foundation, the CRF, where she became executive for strategy and partnerships before taking the highest leadership role in the organisation.

Maboya says occupying different roles in her career has built the type of leader she is today.

“Work experiences give you different inputs into your career. From the experience of working on the shop floor until now, there are certain elements that build your character.”

Maboya now has to focus on making an impact in the country’s most critical sectors – education and entrepreneurship. Her goal as the new CEO is to see the foundation grow the models it has developed for the two sectors and get other companies and organisations to replicate them in order to get maximum impact.

In the education sector, CRF uses the Adopt-A-School initiative. In this programme, the foundation partners with corporates that want to help improve schools through the whole school development model. When a school is adopted, CRF works with school management, parents, communities to turn the school around through programmes such as leadership training, among others.

The Adopt-A-School programme ranges from three to five years.

“Sustainability for us is important. We want to make sure that when we leave the school, the improvements will carry on. The systemic changes in our programme ensures that between three to five years we are able to turn the school around and maintain the changes.”

In the schools where Adopt-A-School has been implemented, the matric pass rate is at 80% with a 62.4% bachelor pass. But the majority of the schools benefit from CRF are primary schools. It is at this level that the foundation has decided to introduce eye testing, giving thousands of learners free spectacles.

The other initiative – Black Umbrellas – aims to develop 100% black-owned small businesses across the country.

There are eight business incubators across the country, with each assist about 50 businesses. The aim is to help these businesses survive the first three years of operation.

Maboya sees herself as a systems person and that is what she plans to use to enable the foundation to achieve more success.

“I am normally a big picture person. It has its positives and negatives. You must have solutions that must last and must address the problem. It is no use to intervene in something that is not a problem because it will resurface in a different form…

“I enjoy thinking about this. I am a big fan of simplicity. To take things that are complex and simplify them so that they are doable.”

Unlike other executives, Maboya never tries to balance work and family as a married woman.

“I don’t even attempt to balance anything. I don’t. When I’m here, I am 100% here. When I am home with the boys, I am 100% there. I have a very supportive husband. We don’t have mainstream daddy and mommy roles. We just do everything as a family. We are at a stage where our careers are accelerating. We have tried to build a support structure around our family.”

Despite her responsibilities, Maboya has been able to obtain an honours degree in geography through Unisa in 2007, as well as an MBA through the Gordon Institute of Business Science in 2016.