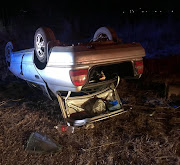 Image: ER24 A collision on Station Road in Carletonville left one person dead and seven others injured on Sunday morning.

A collision in Carletonville‚ west of Johannesburg‚ on Sunday morning involving a single vehicle has left one person dead and seven others injured.

ER24 spokesman Werner Vermaak said it was believed that the vehicle had overturned several times‚ ejecting all eight of its occupants.

“Shortly before 4am on Sunday morning‚ paramedics from ER24 and another service arrived on scene where they found eight people involved in a single vehicle rollover.

“The driver was found with minor injuries. He later declined to be transported to hospital.

“Six men‚ believed to be between 28 and 34 years old‚ were found with moderate injuries. They were treated on scene and later transported to a nearby hospital. Another man was found with fatal injuries. Sadly‚ there was nothing that paramedics could do for him and he was declared dead on scene by another service‚” said Vermaak.