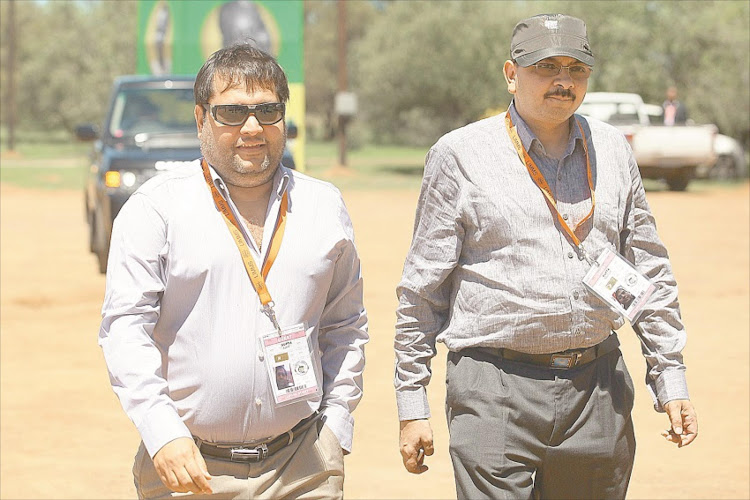 Gupta lieutenant Ashu Chawla‚ said to be the "mastermind" in dealings with the department of home affairs‚ has left the country despite being out on bail on charges of corruption.

He will therefore will not be able to appear before a parliamentary inquiry into state capture at the department of home affairs before parliament rises on Friday for a recess.

Acting home affairs director-general Thulani Mavuso confirmed on Thursday that Chawla was out of the country and said that the question of whether he had broken the conditions of his bail was up to the law enforcement authorities.

Bail conditions for Chawla and his seven co-accused in the Estina dairy farm corruption case stipulate that they report to their local police stations twice a week‚ surrender their passports‚ not interfere with any witnesses and not leave the provinces in which they reside.

The chair of the home affairs committee‚ Patrick Chauke‚ was adamant on Thursday that Chawla would be required to appear before the inquiry into the naturalisation of the Gupta family when the committee sits again in October. He proposed that the speaker of the National Assembly‚ Baleka Mbete‚ be asked to approve the issue of summons against him.

Chauke said from the evidence presented so far it was clear that Chawla was the "mastermind" dealing with home affairs.

"Chawla will have to appear as everything revolves around him‚" Chauke said.

A string of departmental officials — Richard Sikakane‚ Norman Ramashia‚ Major Kobese and Gideon Christians — appeared before the inquiry on Thursday to testify how members of the Gupta family were granted citizenship even though they did not meet the requirements and despite the fact that the applications for five Gupta family members had been rejected by the department.

The naturalisation for Ajay Gupta; his wife‚ Shivani; his mother‚ Angoori Gupta; and his two sons‚ Kamal Kant Singhala and Surya Kant Singhala‚ was granted after Chawla appealed to home affairs minister Malusi Gigaba on behalf of three of them for approval of the naturalisation on account of "exceptional circumstances".

Former ministers – as well as the incumbent minister of home affairs - have been identified as possible witnesses to be called to appear before a ...
News
3 years ago

Ajay Gupta and his wife’s names were not included by Chawla in his letter of appeal but were added by home affairs officials for "family" reasons. Ajay Gupta was ultimately not naturalised as he refused to revoke his Indian citizenship.

The appeal was approved in record time of less than a month. The departmental officials recommended to Gigaba that the appeal succeed and this was the source of "the mess"‚ according to Chauke.

MPs were critical that the officials made this recommendation to Gigaba without conducting due diligence of the claims made by Chawla that the Guptas had invested R25bn in the country and had created 7‚000 jobs.

Chawla‚ the CEO of Sahara Computers‚ had a friendship with Christians‚ head of the immigration division at the SA high commission in New Delhi‚ who helped him obtain visas for employees. The allegation has been made that Christians was the Guptas’ man in New Delhi.

While Christians admitted to having a friendship with Chawla dating back to 2008‚ he denied preferential treatment. He said he had friendly relationships with other captains of industry in fulfillment of the commission’s strategic mission to promote investment in SA.

When confronted with an e-mail to Chawla in which he shared internal departmental information containing state secrets about foreign postings‚ Christians said he could not recall having sent it.

Kobese was instrumental in getting Christians appointed to the position in New Delhi but denied that there had been any interaction with Chawla regarding this posting.

He admitted‚ though‚ that Chawla had asked him to help with bottlenecks in getting visas.

Kobese said his brother was a businessman with links to Chawla.