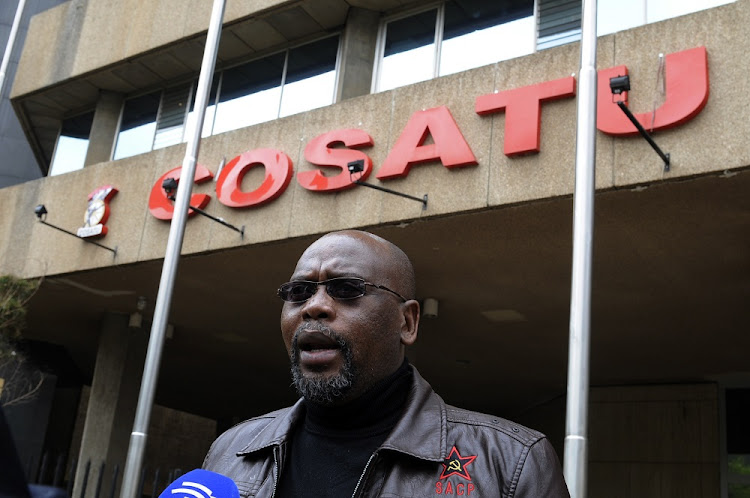 Cosatu president S'dumo Dlamini apparently still harbours ambitions of clinging on to power after serving two terms at the helm of the federation.

Speaking anonymously to Sowetan yesterday, members privy to internal discussions said Dlamini was lobbying some affiliates behind closed doors to nominate him to contest for the position.

"Maybe there is some room for him to come back and fix whatever mistakes that might have happened before, but it’s a question of affiliates. If they want to nominate him, they have a right to do so," the leader said.

Dlamini will likely come up against his deputy Zingiswa Losi, who has been nominated to take over by some of the biggest affiliates. Losi is touted to be the favourite to replace him at the federation's 13th national congress which commences next week Monday.

I opted not to challenge the article at the first time I saw it safe to mention that I registered a complaint with management of the newspaper at the ...
News
3 years ago

Another Cosatu affiliate leader, who spoke on condition of anonymity, said: "S'dumo said he wants to come back but I do not know on what grounds. He initially said he is not coming back but now we are being told that he wants to make a comeback among his clique."

The leader said although Losi was a credible leader, she had not developed enough to lead a federation of such magnitude.

Losi has already been nominated by the National Education, Health and Allied Workers' Union who last month said it wanted her to take over from Dlamini during a Women’s Month commemoration event in Pretoria in honour of the 100 years of ANC stalwart Albertina Sisulu’s life.

The National Union of Mineworkers (NUM), another Cosatu affiliate, said it preferred Losi to be the next Cosatu president.

"We are not aware that comrade S'dumo is willing to run for re-election. As NUM, we have already requested comrade Losi to sign the nomination for the position of the president," said NUM general secretary David Sipunzi.

"We were of the hope that comrade S'dumo is not availing himself [and] now it’s a shock to us if he intends to avail himself. However, we have heard nothing as far as that is concerned," Sipunzi said.

Dlamini, 52, was elected unopposed as Cosatu's president in 2009 and again in 2012. But over the past few years, Dlamini has been involved in bruising battles with some affiliates and federation leaders who had raised concerns about his close association with former ANC president Jacob Zuma ahead of the party's national elective conference in December.

Cosatu banned Zuma from speaking at its events a few months before it endorsed now ANC president Cyril Ramaphosa to take over the reins from him.

The South African Democratic Teachers' Union (Sadtu), one of Cosatu's biggest affiliates, is playing its cards close to the chest.

"We are still talking to affiliates individually and it might be difficult for me now to give you a list of the people we are supporting," said Nkosana Dolopi, Sadtu's deputy general secretary.

"We want to minimise fights and disunity so our leaders are trying to manage and discuss these things in a very mature and comradely way."Dolopi said they wanted to avoid a bruising congress and therefore would only decide on a top six national office bearers that is united.

Contacted for comment, Dlamini did not deny the claims that he intended to run for a third term."I have never responded to such questions and I can't break that history," Dlamini said.

Cosatu spokesperson Sizwe Pamla said he was not aware that Dlamini intended to stand again.

"The workers will go to the congress and nominate their preferred candidate. It's not a big deal to hear that some people prefer the president, but I'm not aware that the president himself has ever said that he is ready to stand [again] because it’s the workers who nominate," said Pamla.

He said if Dlamini is nominated as president, that would be through a democratic process.

Cosatu currently has over 1.5 million workers through its 17 combined affiliates.