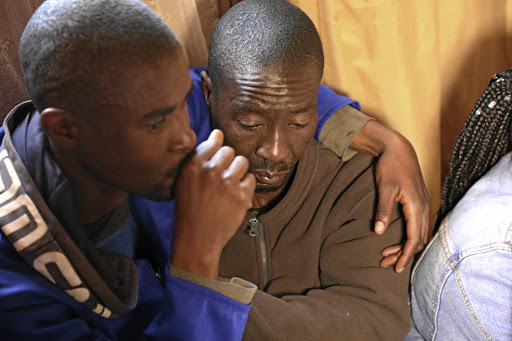 Neo Ngondo comforts his brother Bongani who lost his two children Sanele and Sabelo after they ate food given to them by their tenant. The third brother is in hospital.
Image: Thulani Mbele

Phumzile Mbatha cried uncontrollably as she recalled how her two sons died from suspected food poisoning.

Sabelo and Sanele died, Sinenhlanhla is receiving treatment at a local hospital.

On Wednesday, the Gauteng department of education confirmed that leftovers from a tenant's pap and meat meal the children had were collected for tests by health officials. 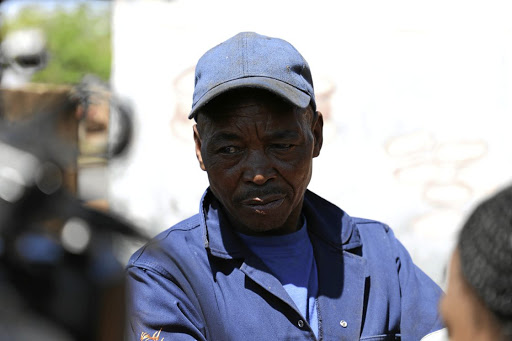 Sabelo and Sinenhlanhla, both pupils at the Kumalo Primary School in Katlehong, east of Johannesburg, were rushed to a local clinic after they started vomiting and complaining of stomach cramps.

Mbatha recalled the harrowing events leading up to her children's deaths. She said a tenant who stays in a shack on the family's yard offered to share his food with the
children. She said this was not unusual as the children sometimes ate food given to them by the tenant.

"He gave me a container and I thanked him. I warmed the food up and gave it to the children. I walked them to school and they were fine," she said.

Mbatha broke down in tears while explaining how Sanele called out for her while playing inside.

Mbatha said she decided to take Sanele into the house and put him on the bed as he was complaining about stomach cramps. She said a teacher then came to inform her that Sabelo and Sinenhlanhla were also rushed to the clinic.

Two siblings died in Katlehong‚ Gauteng‚ and a third was hospitalised after experiencing stomach cramps and nausea.
News
3 years ago

Mbatha said Sanele fell from the bed and started having seizures as she was speaking to the teacher. He was also rushed to the clinic.

However, the tenant, Martin Jason, 59, who was at the house yesterday, said he had eaten the pap, beef with beetroot which was prepared by his daughter on Monday; and on Tuesday morning before giving what was left of the food to the children.

Jason, who has lived with the family for the past 20 years, said he had no idea what might have caused the boys to fall sick but hoped authorities would assist in revealing the truth.

"I feel like crying. My heart is broken," he said. 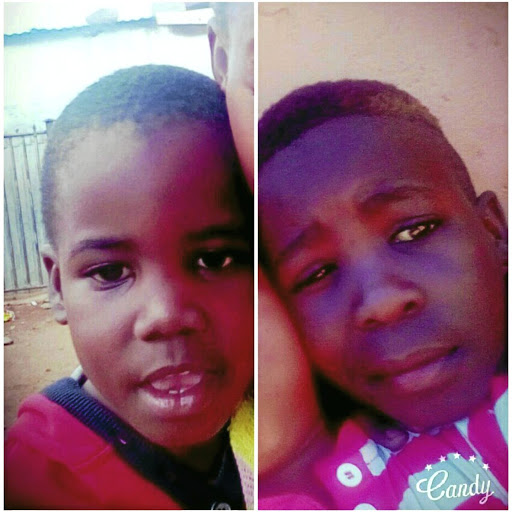 The children's father Bongani Ngondo, 40, was crying while his brother held him tight as Mbatha spoke. His mother, Naomi Ngondo, who was sitting next to Mbatha, also struggled to contain her grief.

"My heart is broken. I could not even sleep that night," Ngondo said.

Gauteng education MEC Panyaza Lesufi, who visited the school and the family, said they would conduct a forensic investigation into the matter.

"The family deserves closure. They want to know what happened," Lesufi said.

He said the department would also give the family support and counselling to the pupils and staff at the school.