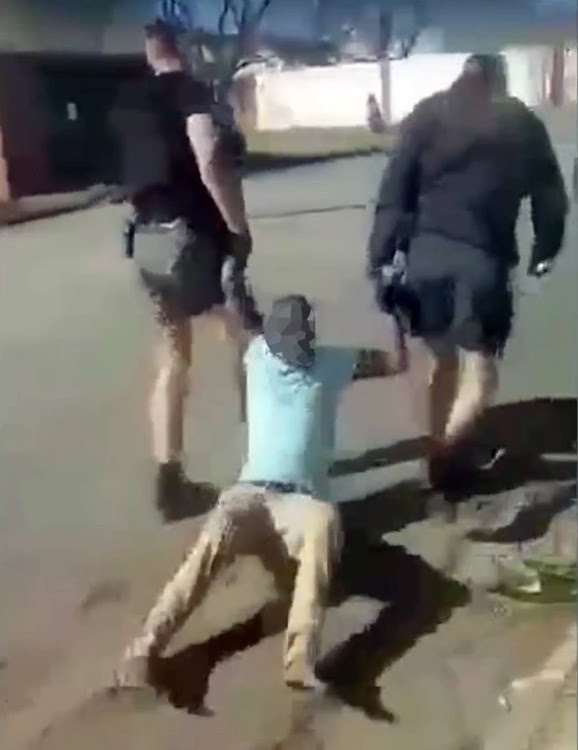 Two white men who assaulted a black man and dragged him to their bakkie in Machadodorp, Mpumalanga have been remanded in custody after appearing in the Belfast Magistrate's Court on Tuesday.
Image: Screengrab

The situation is still tense in Machadodorp, Mpumalanga, as residents barricaded roads leading to the small town, accusing the police of siding with two white men accused of assaulting a black man.

The men, Wyn Swart, 20, and Bruce Botha, 29, who work as security guards, are accused of assaulting and dragging Godfrey Masuku on Monday after he allegedly had an altercation with another white man who works at an Indian shop.

The situation has now turned racial as the shop of the Indian man was set alight by community members on Tuesday morning who in the afternoon set alight two trucks that were passing on the N4 highway.

Police are monitoring the situation, wrangling with residents who are accusing the police of giving the accused preferential treatment by letting them appear in a court outside their community.

On Tuesday, community members went to the police station where the two accused were arrested, camping outside and demanding to manhandle them. Police, however, took the accused to the Belfast Magistrate's Court where they appeared.

That angered the protestors who then set alight the trucks.

Swart and Botha were not asked to plead on two counts of assault with intent to cause grievous bodily harm (GBH) and their case was postponed to Friday September 14 for bail application.

It also emerged that a counter assault case was opened against Masuku by the white man who works for the Indian shop owner.

An incident, captured in a video that went viral on Tuesday, shows two men from a security company assaulting a man before dragging him onto a red bakkie. The video has led to a police investigation into the incident.

Community members have vowed to fight for one of their own.

“For the sake of Masuku we are not going to let them live in peace as we are not at peace too," said resident Mpho Ndlovu.

"The information that there’s a case opened against Masuku of assault is outrageous. I was there and the white man was not assaulted but he called his friends to beat the black man.”

Resident Bongane Sidu told Sowetan that seven people who died 'mysteriously' in the area, and the issue of Masuku, have led the community to believe that the others were tortured, killed and left on the N4 road to make it look like an accident.

“Since the beginning of the year we had people we know didn’t play around roads being hit by cars there. Our information tells us that some were taken by these people who call themselves security guards while they are killing blacks,” Sidu said.

Mpumalanga police spokesperson Colonel Mtsholi Bhembe said police were in the area to monitor the situation.

“We have called backup from the public order police. We had information that they are planning more violence and damage to property, that is why we are monitoring the situation very closely.  The situation is now purely racial.”