Tshwane mayor Solly Msimanga denies he is an EFF puppet 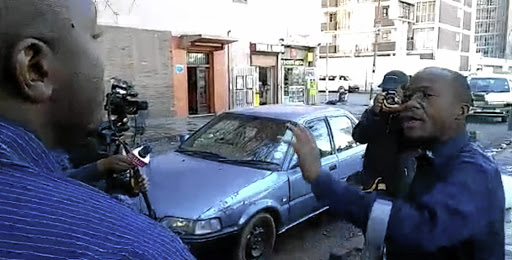 Mayor Solly Msimanga in an argument with an unknown man in Johannesburg on Tuesday.
Image: Penwell Dlamini

Tshwane mayor Solly Msimanga denies that he is dancing to the EFF's tune as city manager Moeketsi Mosola kept his job this week.

The EFF is seemingly calling the shots in the capital as under-fire Mosola, who the Red Berets support, stays on as city manager despite the city investigating allegations of tender irregularities against him. The metro is also already implementing the EFF's proposal of insourcing security officers.

"We are not dancing to anybody's [tune]. We do engage with the EFF, even with the ANC, from time to time. to say that we are dancing to them is very unfortunate," Msimanga told Sowetan on Tuesday.

Last month, Msimanga angered the Red Berets as he tabled a report in a special council meeting recommending Mosola's suspension over allegations of irregularly awarding a R12bn tender.

The EFF walked out as the DA, with the assistance of the ANC, amassed enough numbers in council and resolved to suspend Mosola pending him submitting reasons why he shouldn't be suspended.

This week, the Tshwane council changed tune and decided that Mosola will remain in his position, with some of his powers clipped in relation to the investigation on the tender he awarded engineering firm GladAfrica.

This comes after the EFF helped save Msimanga from an embarrassing vote of no confidence motion of the ANC as it walked out after its motion was disallowed by council speaker Katlego Mathebe.

"Council elected to withdraw some delegated authority from the city manager and to empower the chief operating officer to appoint an independent investigator," Msimanga's spokesperson Samkelo Mgobozi said.

Insiders in Tshwane have, however, argued that Mosola's presence may make officials willing to give testimony not to come forward and the investigation ending up as a "sham".

An insider asked: "How can you have Mosola's deputy investigating him when power and authority reside with Mosola?"

On Tuesday, Msimanga said investigations on Mosola were under way and he expected a preliminary report in 30 days.

"Today I'm writing to the MEC and also to Treasury informing them of my intentions [to go into a forensic investigation] and there will be a report that will be tabled to me in the next 30 days after yesterday's decision of council."

EFF leader in Tshwane, Benjamin Disoloane, said: "From the beginning, the city manager was never suspended. What happened was that there were allegations and those allegations came before council and council decided that it should give him seven days to respond in terms of municipal regulations."

Disoloane said there was no need for Mosola's suspension "but whatever [allegation] that was brought forward must be investigated".

Msimanga said the insourcing of security officers was a matter long decided by council and had no relation to the bids to oust him.

"We had plans of insourcing anyway. It was unfortunate that people did not know that ." said Msimanga.