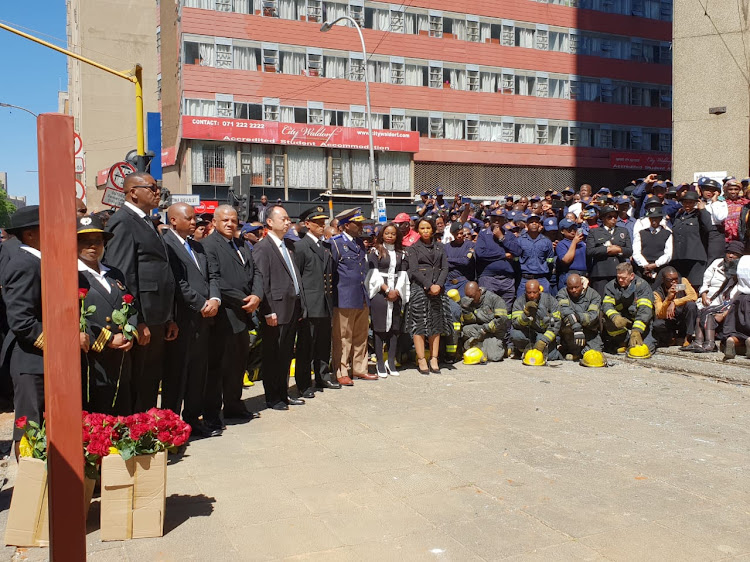 Relatives of Simphiwe Morokana, Mduduzi Ndlovu and Khathutshelo Muedi were inconsolable as they were ushered closer to the Bank of Lisbon building where the three firefighters lost their lives.

The families were given red roses that they placed next to three crosses on the steps of the building.

Relatives of the firefighters who perished while putting out a fire inside a Johannesburg building poured their hearts.
News
3 years ago

Members of the Johannesburg Metro police and emergency services marched down Pixley Seme Street in honour of the three.

Firefighters in uniform each holding a single red rose made a guard of honour around three black crosses trimmed with purple ribbon in front of the building.

A small piece of silver and yellow foil in the middle was pinned down with rocks on the spot where one of the firefighters fell to his death on Wednesday last week.

Next to the guard of honour, members of the Johannesburg Emergency Services in uniform broke into song.

Wreaths lay on the pavement in front of the 24-storey building that housed three government departments where the blaze broke out.

At a memorial held at Ellis Park arena on Wednesday, September 12 2018, firefighters revealed gruesome details of what led to the deaths of their colleagues on the fateful day they were sent to extinguish a fire at the government-owned Bank of Lisbon building in central Johannesburg.