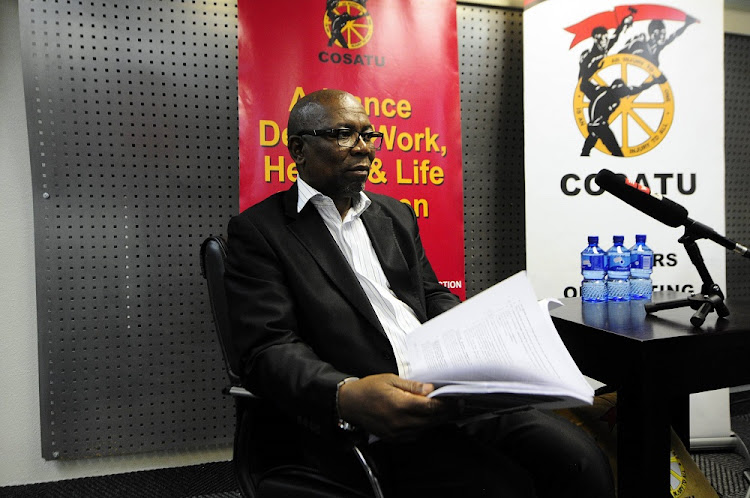 Cosatu is pushing for the establishment of a state-owned bank, in a move aimed at ensuring that poor people can access finances.

This is one of the vital issues which will be discussed at Cosatu's national congress in Midrand, North of Johannesburg, next week.

The creation of a state-owned bank could see Cosatu members withdrawing their accounts from other commercial banks.

Yesterday, Cosatu general-secretary Bheki Ntshalintshali told Sowetan that the federation would push for the establishment of the bank at the congress.

"Our issue is that when the ANC go to its conference, it takes positive radical resolutions but when it comes to implementation they seem to be hesitant. There are numbers of people who are unable to access finances," he said.

Ntshalintshali said there was no competition among the country's major banks.

"We want the state bank to be the one that looks into that particular way. Our view is that its mandate should be different from the commercial banks."

Cosatu will also decide at the congress on whether to support the ANC in the general elections next year.

"We don't just go and endorse the ANC. We will look at the previous manifesto and implementation of the manifesto," he said.

Ntshalintshali added: "We decide whether to support the ANC or not. It is not permanent support for the ANC. We will evaluate every time we go to the elections. It is not a blank cheque that every time there is an election Cosatu members will vote for the ANC."

In the discussion document prepared for the congress, Cosatu is accusing the ANC of sidelining the SACP and Cosatu when key decisions including deployment are made.

"The ANC-led alliance has not been functioning as a driver of the national democratic revolution. After every election, the SACP and Cosatu got sidelined and undermined in the process of policy implementation. The ANC itself is in many occasions undermined by its own cadres deployed in government," the document says.