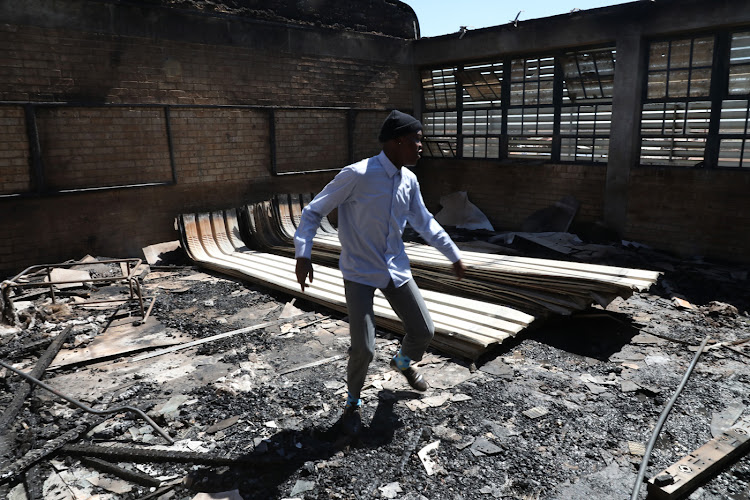 A fire gutted two classrooms and a small office at Botleng Secondary School in Delmas on Saturday
Image: THULANI MBELE

Two classrooms and a small office of a Delmas secondary school in Mpumalanga were burnt down when a group of boys were allegedly trying to cook a pigeon over an open fire .

The fire , which flared out of control, destroyed classrooms of grade 10s at Botleng Secondary School on Saturday.

Residents told Sowetan on Monday the group of boys were cooking a pigeon they had caught at the school when the fire broke out.

“I received a call on Saturday from one of the general workers, saying that three classrooms were gutted,” a school official told Sowetan on Monday.

“We suspect that the fire started from an unused classroom which spread to the two other classes. We always have a problem with boys throwing stones trying to hunt down the pigeons at the school.”

He said the fire had, among others, worsened the school’s desk and chair shortages.

“The school had a shortage of chairs and this has made it worse. Some pupils are forced to stand throughout the lessons,” the official said.

He said the school did not have electricity on Monday due to the damage caused by the fire .

An 18-year-old grade 10 pupil said: “We don’t have desks or chairs and we have been standing since the morning and it is very tiring... we cannot concentrate,” she said.

Police spokesperson Gerald Sedibe said police were still investigating the cause of the fire .

Mpumalanga education spokesperson Jasper Zwane said officials from the department visited the school on Monday “to make an assessment of the damage and to further advise on the course of action that must be undertaken going forward”.