When it comes to crime against children‚ more boys were murdered than girls in the last financial year in SA.

This is according to the latest crime statistics on Tuesday‚ which revealed that 985 children had been murdered across the country - 695 of those were boys and 294 were girls.

The majority (279) of the children were killed in the Western Cape‚ followed by KwaZulu-Natal (221) and the Eastern Cape (180).

KwaZulu-Natal recorded the highest number of girls being murdered with 91 cases reported.

It has been a long and hard road for two sets of parents since the murder of their daughter Gabriella Alban in a Camps Bay hotel in 2015.
News
3 years ago

The most deadly province for boys was the Western Cape with 219 being murdered.

One of the child murders which shocked SA in the last financial year was the case of a Johannesburg father who was arrested for beating his five-year-old son to death.

Rashieda Landis‚ a ward councillor from Chrisville‚ south of Johannesburg‚ recalled the last moments of the boy’s life after he was allegedly severely beaten by his father.

“He [the father] was very casual. So casual - after he kicked that baby and smashed him against the wall. He [the boy] had cigarette burns all over his body‚” Landis told the publication at the time.

“I was with him when he died. I saw his face and I immediately knew he had been beaten … I called his name; he looked up at me and sighed his last breath.”

The man had recently been freed from jail after spending several months behind bars for beating his son.

Lundis said that the boy’s mother lived in Bloemfontein and had given custody of the child to his paternal grandmother‚ but that the child ultimately ended up in the care of his father and his girlfriend. 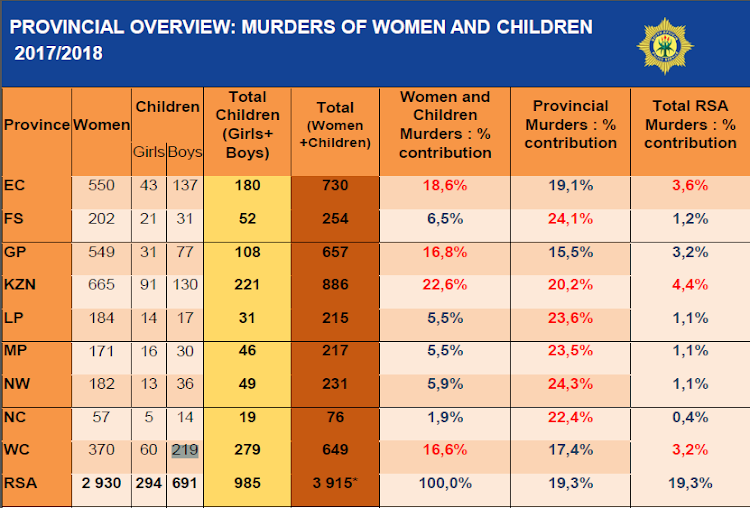 2017/18 statistics on the killing of women and children.
Image: SAPS

The 2017/2018 crime statistics were released on September 11 2018. Here are five times people fought back against crime.