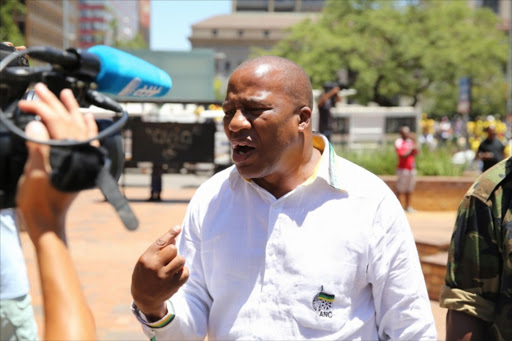 “The alleged clandestine plot‚ which regrettably includes the SG [secretary-general] comrade Ace Magashule‚ undermines the unity and renewal efforts of the ANC‚” he tweeted on Sunday.

Mthembu said the secret plot undermined efforts to fight and reverse the impacts of state capture.

The Thursday meeting was preceded by one the day before at the Beverly Hills Hotel in Umhlanga Rocks. That meeting is believed to have been attended by Magashule‚ Mahumapelo and former SAA board chair Dudu Myeni.

Following the decision to disband the ANC provincial executive committee (PEC) of the North West, four regions have threatened to head to court to ...
News
3 years ago

Mthembu said: “Those involved in this plot also want to undermine the ANC 2019 election campaign so as to produce disastrous results.” The ANC Women’s League issued a statement on Sunday calling the story false.

“The ANC lists conferences and 2019 elections are approaching and journalists like Qaanitah and Jeff who have abandoned their code of ethics in journalism will intensify their malicious false stories aimed at dividing and discrediting the ANC‚” Matuba said in the statement.

The statement did not address the details of the story.

“No amount of false reporting by Qaanitah and Jeff or any journalist will succeed in diverting the ANCWL from ensuring that the ANC leadership collective under President Ramaphosa tackles challenges within and outside that movement and makes the ANC an even more effective instrument of liberation in the hands of the people‚” Matuba said.

ANC Youth League KwaZulu Natal secretary Thanduxolo Sabelo also issued a statement denying having attended the meeting‚ but did not explain why he was seen outside the Maharani hotel.

“I want to state that I was never part of a meeting as detailed in the article. I am not part of a plot and will not be part of a plot to oust the sitting leadership of the African National Congress. I enjoy a good working relationship with President Cyril Ramaphosa‚ the President of the ANC and the Republic and would not be part of a plot to oust him‚” Sabelo said. He said the report was aimed at harming his good working relationship with Ramaphosa. “Once again I wish to distance myself from the said meeting and state categorically that I was not part of any meeting‚” Sabelo said.