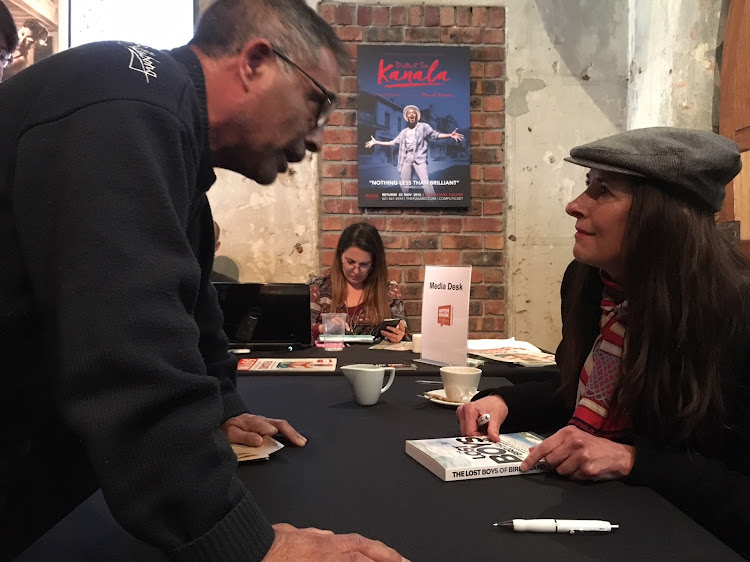 “I accepted very quickly that he had pulled the trigger himself. He did shoot himself but Mark was anti-suicide.”

Co-author of ‘Lost Boys of Bird Island’ Chris Steyn on Sunday revealed her thoughts on the controversial book which alleges top apartheid ministers molested young coloured boys on an island off the coast of Port Elizabeth.

Steyn‚ who co-authored the book with former policeman Mark Minnie who was found dead last month‚ was part of a panel discussion that saw renowned writer Marianne Thamm host the talk with Steyn and Netwerk24 journalist Maygene de Wee at the Open Book Festival in Cape Town on Sunday morning.

“Mark Minnie would have loved to have been here today‚” said Thamm.

“I want to start this talk by saying we are not here to criticise any weaknesses or allegations in this book as has been done from certain parts of the public after this book was released‚” said Thamm as she opened proceedings before a packed audience at the Fugard theatre.

Minnie allegedly shot himself dead at a friend’s farm in the Eastern Cape in August. But Steyn believes there was more to his death than meets the eye.

“I have never felt so much pain. You were the rock we stood on‚” said the son of former detective and author of The Lost Boys of Bird Island‚ Mark ...
News
3 years ago

Steyn said‚ “Many years ago when his ex-partner attempted to kill herself‚ Mark was so upset with her because of how it would have affected the children — so I think there was something that made him do it. He may have received an ultimatum — it could have been a threat against his daughters because he was terrified of losing them. But Mark was worried that there were a lot of high-profile people after him.”

“Mark was fearing for his life and his children’s lives so badly that even when someone knocked on his door he would curl up in a ball in his house as he was so scared‚” said Steyn.

De Wee was the last journalist to interview Minnie before he died.

“Myself and Minnie started speaking on Facebook and I went to the Eastern Cape to meet him and we met in a McDonald’s parking lot. It was three days before he died. Mark was anxious‚ but more paranoid than anxious. He spoke a lot about his daughters and he didn’t want people to know he was in South Africa‚” said De Wee.

What Mark Minnie said in his “last piece of writing”

“He was worried for his daughters. Every place we stopped at after that‚ he would smoke and phone his daughters to find out if they were ok. But saying that‚ he was a man who looked forward to the day. He was happy to be alive. There must be more to his death‚” said De Wee.

Steyn continued‚ “We knew so little when we wrote the book. I wish we had what we have now. Information is coming in daily which corroborates what we wrote. The book is the tip of the iceberg. People are not worried about what’s in the book‚ they’re worried about what’s coming.

“I believe there are still very powerful people involved in our systems. We know how powerful the apartheid regime was.

“I believe the investigation into Mark’s death has been done professionally and I believe it was thorough‚ and whatever the findings are won’t be in dispute‚” said Steyn.

De Wee echoed these statements. “The reports all point towards suicide and that’s all we know for now.”

Relative of Mark Minnie does not believe he committed suicide.
News
3 years ago
Next Article