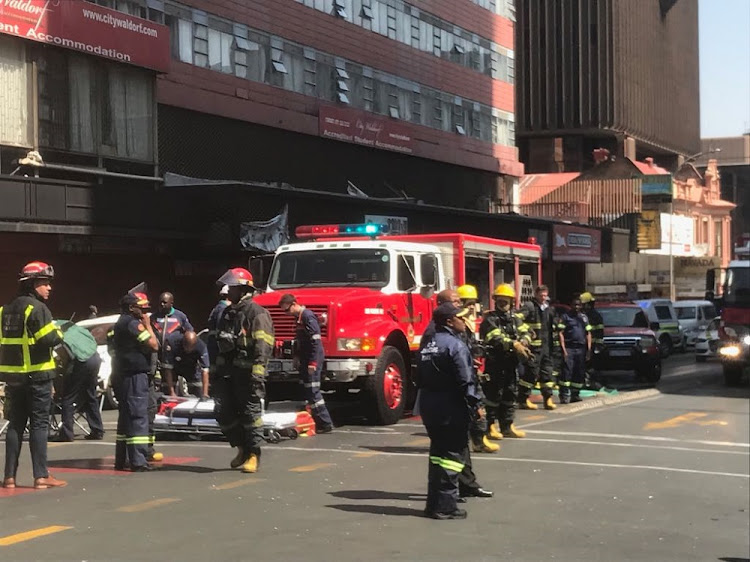 The streets surrounding the building where a fatal fire broke out on Wednesday are set to remain closed‚ as emergency services attempt to protect the public from falling pieces of glass and other debris.

Albertina Sisulu and Sauer streets‚ in the vicinity of the Bank of Lisbon building in the Johannesburg CBD‚ would be cordoned off on Thursday morning‚ the city’s MMC for public safety‚ Michael Sun‚ told this publication on Wednesday evening.

The building houses‚ among others‚ the Gauteng government’s health‚ human settlements‚ and co-operative governance and traditional affairs departments.

Three firefighters died in the fire‚ one of them after falling from more than 20 floors up as horrified eyewitnesses looked on. The others died inside the building. While several people were trapped‚ there were no other fatalities‚ this publication was told.

Sun said the fire was contained to the 24th floor. It had been extinguished and the building completely cleared of all people by Wednesday evening‚ but that did not mean the building was given the all-clear.

He added that authorities were poised to start their investigations — into both the cause of the fire and the deaths of the three first responders — as soon as the building was declared safe enough to enter. It was hoped this would happen on Thursday.

While the cause was unknown‚ Gauteng premier David Makhura believes one employee might be able to unravel the mystery.

Gauteng health department employees have described the terror of a deadly fire which broke out in a Johannesburg CBD building – with some running for ...
News
3 years ago

Earlier in the day‚ provincial infrastructure MEC Jacob Mamabolo said the building was just 21% compliant with occupation‚ health and safety standards. Ideally‚ he said‚ buildings should be 85% compliant.

“The efforts to put out the blaze were hampered by a lack of sufficient water pressure in the building‚ which is an important safety requirement in a building of this size. It is reported that several government officials who evacuated the building have referred to unsafe conditions in the offices‚” he said.

Mamabolo said the provincial government received a report just a week ago‚ on August 27‚ which indicated that eight government-owned buildings were non-compliant‚ including the Bank of Lisbon building.

Meanwhile‚ Johannesburg mayor Herman Mashaba was set to visit the families of the three firefighters on Thursday.

An employee in the building said he did not take the  warning that the building was on fire seriously until he began to see the fire.
News
3 years ago
Next Article