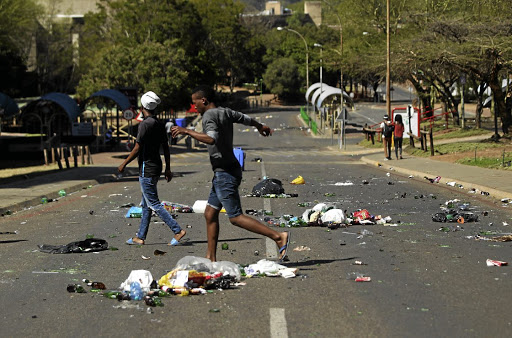 A fresh protest that saw bins burnt and the main campus of the Tshwane University of Technology in Pretoria West trashed on Tuesday has left students divided.

The EFF Student Command (EFFSC) and Pan-Africanist Student Movement (Pasma) have accused the ANC Youth League (ANCYL) and its ally the SA Students Congress (Sasco) of unnecessarily disrupting academic activities when exams were around the corner.

Academic activity was disrupted for the second day on Tuesday as students led by the ANCYL and Sasco shut down the Pretoria campus, protesting about lack of adequate student accommodation.

The university has been unable to return to its scheduled academic calendar since the end of the five-day mourning period for the death of Soshanguve campus student Katlego Monareng, who was allegedly killed by police last month.

EFFSC chair Hiswona Mabunda said it was agreed in the meeting with the executive management committee (EMC) and all student structures that academic activity would continue on Tuesday as students await the results of the investigations into alleged SRC election rigging and justice for Monareng's death.

"We were surprised when we woke up to hear that there is a shutdown. This was not what we agreed on in that meeting," Mabunda said.

"We want the academic programme to resume but now you have students shutting down campuses for accommodation and funding. Classes must resume because exams are around the corner."

B-Tech management student Nhlamulo Mangwane said they had lost so much time during the mourning period and subsequent disruptions that they have a lot of catching up to do.

"Students have tests and exams to prepare for. We have lost valuable study time and the majority of student movements agree that academic activity must resume. It is only the ANC Youth League and Sasco that is shutting down campus."

"While we fought for free education, our students have the means to pay accommodation but accommodation itself is not available," he said.

He said there will be no more disruptions as they have committed to returning to class on Wednesday.

"The university must release the communiqu� [on Wednesday]. We need to have contact time with our lecturers, we need to study."

The university said in a statement: "The remainder of the week will be dedicated to lecturing activities and catch-up for the time lost . and the disruptions experienced over the past two days."