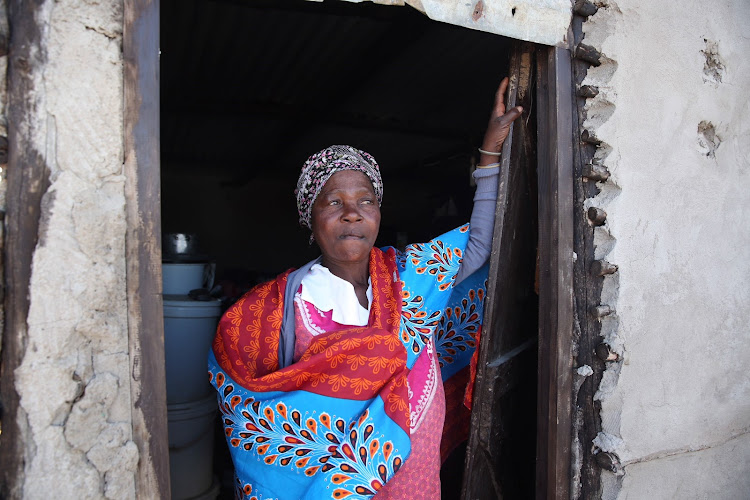 A tearful Gogo Bacabangile Ngcobo recalls how she was attacked by a school girl with a stick, the incident was caught on video.
Image: JACKIE CLAUSEN

It's been three weeks but pensioner Bacabangile Ngcobo from KwaHlabisa in northern KwaZulu-Natal is still in pain after she was allegedly assaulted by a teenage girl following an argument over iJuba.

Sitting outside her modest home in rural KwaZulu-Natal‚ where she was visited by this publication on Monday‚ Ngcobo‚ 69‚ said she was still emotionally traumatised after she was allegedly assaulted by a 19-year-old matric pupil - a distant relative - over the older woman's sorghum beer.

A video of the alleged attack has gone viral‚ causing outrage on social media.

“I am in so much pain‚ my right breast‚ my back and most of my body still aches from the beating‚” an emotional Ngcobo told a delegation of concerned officials from the Democratic Alliance and media.

Ngcobo said that although she had been to see a doctor‚ she could still feel the pain from the lashing.

After the assault‚ Ngcobo alleged that she went to the girl's family but the family did nothing to reprimand the girl.

The people's blesser and businessman‚ Malcolm X‚ will donate R10k to a gogo who has been "humiliated" by a video of her eating ice cream with bread‚ ...
News
3 years ago

“I will not leave this place‚ I want to build up my little home so that my children can say that‚ at the very least‚ I left them with a home.”

The mother‚ who collects a pension‚ said that she lived alone as her children were trying to find jobs.

Her elderly neighbour‚ Miriam Mngomezulu said: "When I saw her beaten like she was‚ her hands bruised and her fingernails bloody‚ I was overcome with great pain. I couldn't even eat after I saw her." Members of the rural community said that they weren’t surprised when they saw the video of Ngcobo’s assault.

“The youth here have no respect for their elders‚ they do not know what an elderly person is. I am not surprised about the assault‚” said Sibonelo Mhlanga‚ a resident in the area.

Democratic Alliance KZN provincial leader Zwakele Mncwango said: "It is shocking to hear how she has been abused. This says that our elderly people are no longer safe in our society. We need to bring back the spirit of ubuntu... It is shocking that the young people of today no longer have that respect (for the elderly). " Mncwango was speaking at Ngcobo's home where he‚ along with UMkhanyakude constituency head Sharon Hoosen‚ had brought gifts and groceries for Ngcobo.

Zwane also said that the female had appeared in the Hlabisa Magistrate’s Court on August 14 and had been released on bail. She is expected back in court on September 11.