Expert disputes cause of farm death 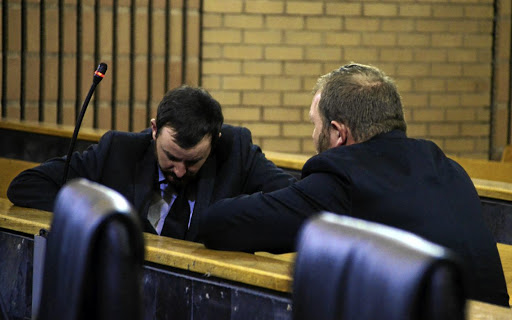 An emergency care expert has claimed that a teenager who was allegedly killed by two farm workers might have died from aspiration.

Sumaya Rajan, a private emergency services company owner, told the North West High Court on Tuesday that Matlhomola Mosweu of Coligny could not have died due to neck injuries.

Rajan was taking the stand in the trial of Pieter Dooreward and Phillip Schutte, who are accused of killing Matlhomola, 16, after they accused him of stealing sunflower seeds from a farm.

Rajan disputed that the teen died from "blunt force neck trauma" as postmortem results stated. Rajan, who was reading the patient report performed on Mosweu at the crime scene, said specialist pathologist Ruweida Moorad got her facts wrong about what led to Matlhomola's death.

"In my opinion, the patient's breathing was compromised. He was lying with his body facing down, and when the body was turned over blood flowed back to [his] head and heart. That's when he started aspiration," she said.

Owner of Platinum Emergency Care ambulances in Zeerust, Sumaya Rajan, said if medical procedures were performed the boy’s life might have been saved.
News
2 years ago

Rajan said paramedics who attended to Matlhomola should have fitted him with a cervical collar to support his neck. She said his airway was not cleared and that blood was not sucked from his lungs.

During cross-examination, state prosecutor advocate Dan Moeketsi said Rajan was not qualified to dispute the conclusion of a qualified medical pathologist.

However Rajan, who was testifying on behalf of the defence, maintained that Matlhomola died due to a lack of proper breathing as blood couldn't flow properly.

He was allegedly thrown out of a moving bakkie in April 20 last year at Rietvlei farm after Dooreward and Schutte had allegedly forced him into the car.

The two were also accused of depriving the sole state witness, Bonakele Pakisi, of his freedom of movement after forcefully driving with him and Matlhomola around the farm in the back of the bakkie.

One of the two farm workers accused of the murder of a Coligny teenager did not see the logic behind taking the severely injured boy to the clinic.
News
2 years ago
Next Article