Msimanga and EFF in a new deal for Tshwane 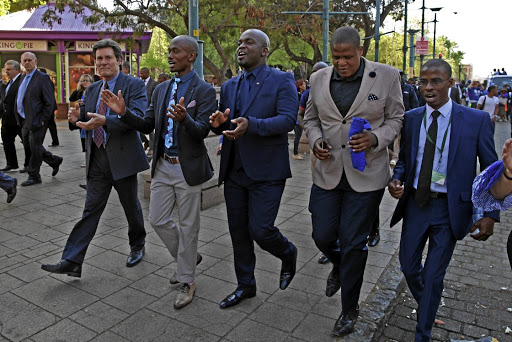 Mayor Solly Msimanga and his entourage walking to the council chamber of the City of Tshwane where he faced a motion of no confidence. / Thapelo Morebudi.

Tshwane mayor Solly Msimanga appears to have acceded to the demands of the EFF in an effort to hold on to his mayoral chain.

Msimanga - who faced two motions of no confidence from the EFF and ANC last Thursday, which needed just a majority vote to cut short his two-year tenure - was saved by the Red Berets.

EFF deputy president Floyd Shivambu took to Twitter on Friday, announcing that the mayor had given its proposal of in-sourcing security officers the green light.

This proposal, which was implemented by another DA mayor, Herman Mashaba, in the City of Joburg recently, was one of the issues the EFF raised with Msimanga for its continued support.

"The EFF's responsibility in society is to teach leaders to be humble and to accept guidance. Four thousand workers were insourced in Tshwane because of the EFF, and more victories will be recorded. The EFF decisively used its strategic position to empower workers," tweeted Shivambu, while sharing a video clip in which Msimanga was saying they needed to work with the EFF.

As national political circus continues, the world is not waiting for SA
Opinion
3 years ago

The ANC ended up with egg on its face as its bid to oust Tshwane mayor Solly Msimanga fell flat.
News
3 years ago

EFF commander in chief Julius Malema told a press conference in Joburg early last week that Msimanga had only wanted to insource about 50 security officers per year.

The EFF also demanded that no action be taken against city manager Moeketsi Mosola, who Msimanga had tabled a report against, recommending his suspension at a special council meeting.

Mosola is accused of allegedly irregularly awarding a R12bn tender to engineering firm GladAfrica to manage the capital projects of the city over a three-year period.

Political analyst Ralph Mathekga said: "How do we know that a deal reached in Tshwane has to do with service delivery? This now seems like a balance of power where deals which undermine democratic processes are cut where they don't even consult their constituencies."

Msimanga's spokesperson Samkelo Mgobozi said: "There is no investigation into GladAfrica yet. That'll only be when council meets to decide once it has applied its mind to CM's [Mosola's] representations." Mgobozi said the insourcing of security officers was "completely unrelated".

The Red Berets were yet to go to court to overturn speaker Katlego Mathebe's decision to disallow the party's motion of no confidence in Msimanga.