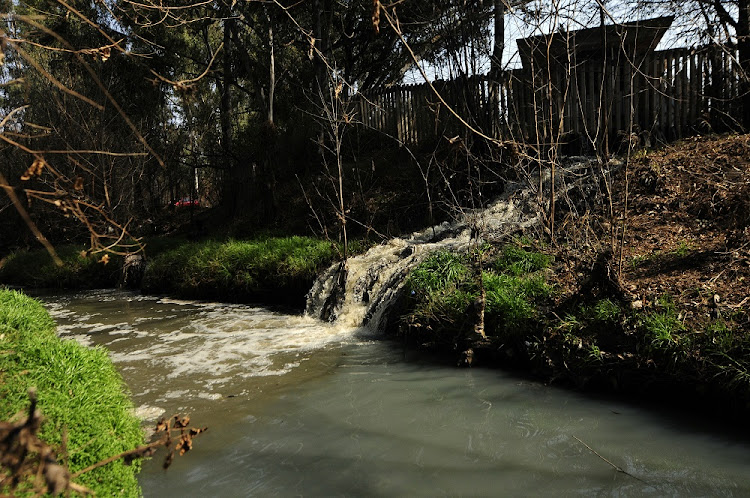 A sewage can be seen going into the Rietspruit River that flow into Vaal River which supply water to 50% of Gauteng households.
Image: SANDILE NDLOVU

The South African Human Rights Commission is to hold a formal inquiry into the spillage of toxic effluent into the Vaal River.

An ecological disaster has unfolded as raw sewage and industrial pollutants flow into parts of the river.

Responding to a deluge of complaints by people and communities living nearby‚ the commission conducted an inspection to assess the state of the river on Monday.

“What we saw … gave credence to allegations that have been made by residents that there is sewage spillage in the Vaal River‚” Gauteng provincial manager of the commission‚ Buang Jones‚ told Radio 702 in an interview on Tuesday.

Raw sewage has been flowing into the river from pump stations in the Emfuleni Municipality on the northern bank of the river‚ killing thousands of ...
News
3 years ago

“Some of the key concerns is that the pollution emanates from wastewater works which have been poorly managed by the Emfuleni Municipality. We’ve also seen that toxic effluent emanates from industry‚ from a nearby Sasol plant‚ in the Vaal area‚ so we are going to initiate a formal inquiry to look into all these issues‚” he said.

The decision to hold a formal inquiry was taken because the pollution had a direct bearing on a number of rights under the Constitution‚ including the right to access clean water‚ and may contravene legislation related to water.

Times Select reported in August that sewage had been flowing into the river from pump stations in the Emfuleni Municipality‚ killing fish in their thousands.

At the time‚ E.coli bacteria counts taken at the Rietspruit River‚ one of the Vaal’s tributaries‚ were way in excess of what was considered to be dangerous. Farmers and residents along the river said thousands of fish were dying and the debacle was having a negative effect on tourism. Farmers use to water to irrigate their crops.

Jones said the commission would hold the relevant authorities accountable‚ from municipal level to provincial level‚ as well as industries implicated in the pollution.