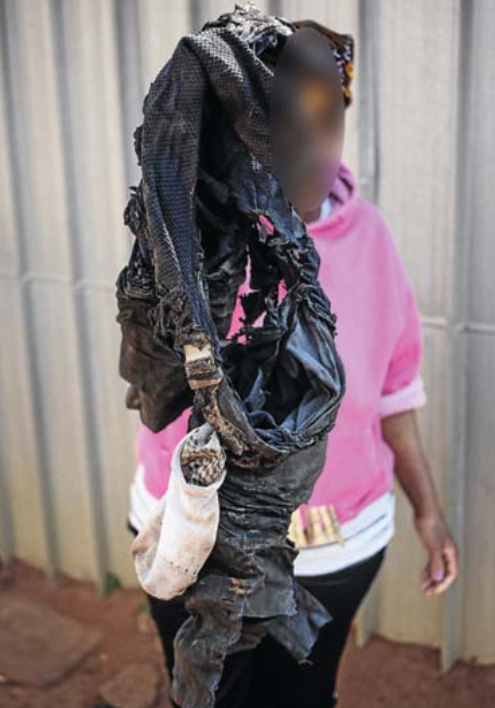 The mother of the boy who survived a necklacing in Daveyton holds his scorched clothes.
Image: Alaister Russell

A 17-year-old boy who survived a necklacing attempt three weeks ago has spoken out about the incident for the first time.

The teenager, who cannot be named to protect him, spoke to Sowetan from his hospital bed in Ekurhuleni.

He detailed how he is still haunted by the smell of his own skin after being set alight.

A vigilante group in Daveyton put a tyre around his neck before setting it alight outside Unity Secondary School in Daveyton. He was targeted with four other boys suspected to be gang members who allegedly terrorised the community. One alleged gang member was hacked to death.

Gauteng SAPS spokesperson Brigadier Mathapelo Peters said two suspects have been arrested with a possible link to the murder.

The teenager said: “I received a call from a friend of mine while I was walking to school. He sounded frantic and told me that I should stay indoors because there was a group of people who were looking for anyone who is a gangster,” he said.

The teen said he heeded his friend’s call. However, it was when he returned home when he was accosted by the mob.

“They ordered me to tell them where the rest of my friends were,” he said.

The teen said he was then attacked and assaulted viciously by the mob.

“They told me that I was going to die for the things I’ve done before they dragged me around the streets. I was scared because they told me that they were looking for paraffin so they can burn me.

“They didn’t find it, and then they took me to Unity [Secondary School] so I could point out my friends who they said were part of my gang,” he said.

The youngster denied being part of a gang, but admitted to belonging to a social group named “Freaks”.

“We don’t go around robbing people as the mob claimed,” he said.

The teen recalled the moment he was burnt. He said it was one of the most terrifying experiences of his life.

“I managed to escape their clutches while at Unity, but they caught me outside the school and proceeded to beat me. One of them poured paraffin over me.”

He said he could not recall the details after he was set alight. He only regained consciousness in hospital.

His emotional 39-year-old mother said she did not understand why the residents who accused her son of being a gangster failed to call police.

She said the doctors told her her son had suffered 85% burn wounds, but was responding well to treatment.

“Sometimes we go through things that bring us pain, but everything will be okay.

“I just want to know why people didn’t call the police or an ambulance when this thing was happening,” the distraught mother said.