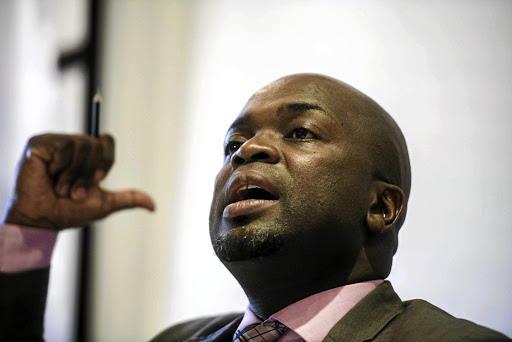 Tshwane mayor Solly Msimanga today faces two motions of no confidence from the ANC and the EFF, which may end his tenure in office.
Image: Alet Pretorius/ GALLO iMAGES

Last-minute lobbying was underway in Tshwane on Wednesday as the ANC pushed for its regional chairperson Dr Kgosi Maepa to become mayor Solly Msimanga's replacement.

Msimanga is facing two motions of no confidence from the ANC and the EFF, which look set to cut short his tenure.

ANC Tshwane caucus spokesperson Lesego Makhubela confirmed on Wednesday that they were negotiating with other political parties in the city "for the benefit of the people of Tshwane".

"Solly is one part of the problem, the most important thing is the delivery of services to the communities of Tshwane of which Solly is the stumbling block ...

"The engagements [with other parties] are about putting the interest of the people of Tshwane first," Makhubela said.

City of Tshwane mayor Solly Msimanga is likely go to bed tonight an ordinary councillor. The ANC and EFF are expected to vote him out of office.
News
3 years ago

Msimanga on Wednesday also revealed to Sowetan that the DA was also engaged in negotiations with other political parties.

"There are always negotiations that take place with voting partners and coalition parties," Msimanga said.

"I have lead a very consultative relationship with coalition members and conscientiously engaged opposition parties on many issues, including but not limited to this matter currently being addressed."

The ANC had already indicated that two of their 89 councillors will be absent at today's much-anticipated council meeting.

The DA has 93 councillors while the EFF has 25 in the council which has 214 members.

For the motion of no confidence to succeed, the ANC and the EFF need a simple majority, which is 108 votes.

The DA and ANC are however in a precarious situation as they both desperately need EFF's support to reach the magic number 108, to either save Msimanga or elect Maepa respectively.

The ANC and the EFF have agreed to remove Msimanga and both have indicated that they would support each other's motions in council.

City of Tshwane mayor Solly Msimanga said on Tuesday that he was taken by surprise by the moves by the EFF to remove him as the capital city’s first ...
News
3 years ago

EFF caucus leader in Tshwane Moafrika Mabogoane and national spokesperson Mbuyiseni Ndlozi had not responded to Sowetan's request for comment at the time of going to print.

The motions of no confidence follow last week's special council meeting in which a report tabled by Msimanga recommending city manager Moeketsi Mosola's suspension was approved.

ANC and DA councillors approved the report to recommend Mosola's suspension with immediate effect for his awarding of a lucrative tender granted to engineering consultants GladAfrica to manage the city's entire infrastructure budget worth about R12-billion over a three-year period.