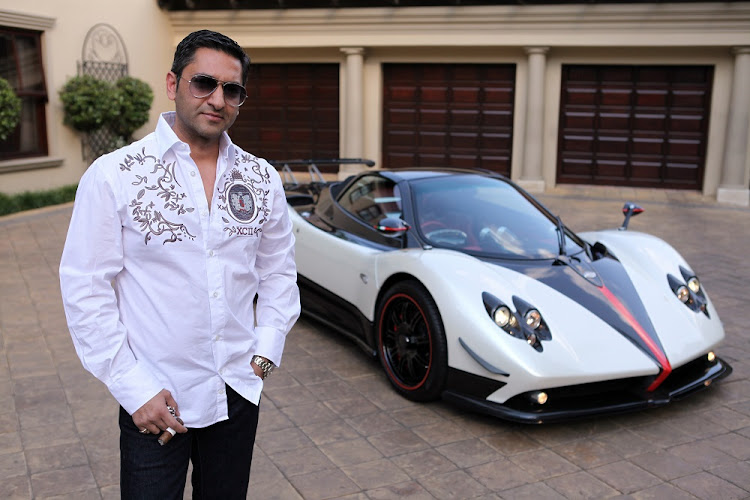 File image of controversial businessman Zunaid Moti at his home in Sandhurst, standing next to his Pagani Zonda limited edition.
Image: JAMES OATWAY

Controversial South African business tycoon Zunaid Moti has been arrested and is being detained in Germany.

His attorney‚ Ulrich Roux‚ said in a statement on Saturday that Moti had been arrested at the Munich airport on August 19.

This comes after Russian authorities issued a red notice on January 24 2018.

Roux said the notice was not authorised and vetted by Interpol’s General Secretariat.

“Since August 2017‚ Mr Moti has been subject of a litany of spurious and fraudulent claims made by a known member of the Russian Mafia‚ presently resident in Dubai.”

Interpol issues a red notice when countries are unable to arrest suspects who have fled their policing jurisdiction.

The men stand accused of defrauding an allegedly disgruntled business partner - Russian citizen Alibek Issaev - out of R6.6-million in an apparent bogus mining deal. The fraud allegedly took place in Lebanon in 2013.

They claimed in their affidavits that warrants for their arrest had been obtained after a potential business deal with Issaev had turned sour and he allegedly stole intellectual property from them‚ for which they had obtained an Interpol arrest warrant against him. Issaev was a partner in their South African FerroChrome smelter business.

A Durban business owner was shot dead at a petrol station in the south Durban basin on Wednesday.
News
3 years ago

They also allege that Issaev stole a rare R500-million pink diamond from them‚ which he had promised to sell but allegedly did not. He did not return the 50.66-carat diamond. The four are‚ however‚ accused by international diamond dealer Sylla Moussa‚ who owns Sylla Diamond International‚ of stealing the diamond from him in 2013.

Roux said: “Notwithstanding a directive by the Commission for the Control of Interpol’s Files on December 15 2017 that all data on Interpol’s systems relating to Mr Moti was to be blocked‚ the Diffusion Notice (red notice) was issued by Russian Authorities in a manner that circumvented the CCF’s directive and the General Secretariat’s control measures in respect of the publication of data.”

Roux said the red notice was issued to several countries including South Africa‚ the United Kingdom‚ Switzerland and Zimbabwe “in which Mr Moti has travelled extensively and without impediment over the past 12 months”.