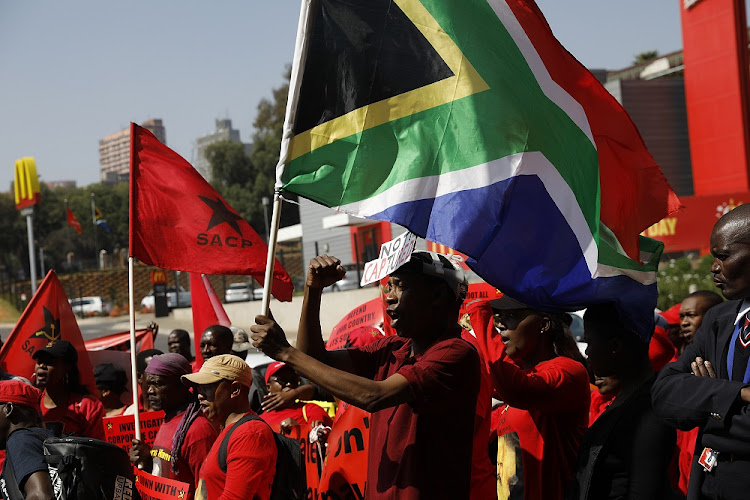 He said the effects of state capture were being particularly felt at the SABC‚ where workers were not getting salary increases‚ and at television news channel Afro Worldview (formerly ANN7)‚ where there were lob losses as a result of the closure of the former Gupta-owned channel.

Tshabalala made these comments during the South African Communist Party’s march to the State Capture Commission of Inquiry in Parktown‚ Johannesburg‚ to show support for the commission’s work.

The commission began on Monday. On Friday‚ while the march was taking place outside‚ the commission heard the evidence of former deputy finance minister Mcebisi Jonas‚ who detailed how the Hawks had attempted to deliberately sabotage the investigation into the Guptas’ attempt to bribe him.

SACP on Friday staged a march to the Judicial Commission of Inquiry on State Capture.
News
3 years ago

Jonas testified that the head of the Hawks anti-corruption unit allegedly tried to force him to sign a false statement to halt the police investigation into the Gupta’s attempt to promote him to finance minister in October 2015.

SACP first deputy general secretary‚ Solly Mapaila‚ said the party was at the commission to give its full support.

“No one will run away from corruption in this country and we want to retrieve billions stolen as a result of state capture‚” Mapaila said.

He said the SACP was the first to call for the judicial commission of inquiry into what it called the corporate capture of the state. Mapaila said it made the call as it feared that people from outside government were controlling the governing system.

“People had stolen the instrument of implementation of the government programme. We soon realised that the network was too wide and too deep‚” Mapaila said.

SACP Gauteng secretary Jacob Mamabolo was to read the memorandum and the secretary of the commission Khotso de Wee was on hand to receive it.

SACP members who were part of the gathering were carried placards expressing support.

One read: “Don’t waste taxpayers’ money ‚ finish in time‚ we want the truth.”

Another said: “Investigate Corporate Capture of the State without Fear‚ Favour or Prejudice.”

Mcebisi Jonas has made a bombshell revelation at the state capture commission of inquiry about how the Hawks unity attempted to deliberately sabotage ...
News
3 years ago