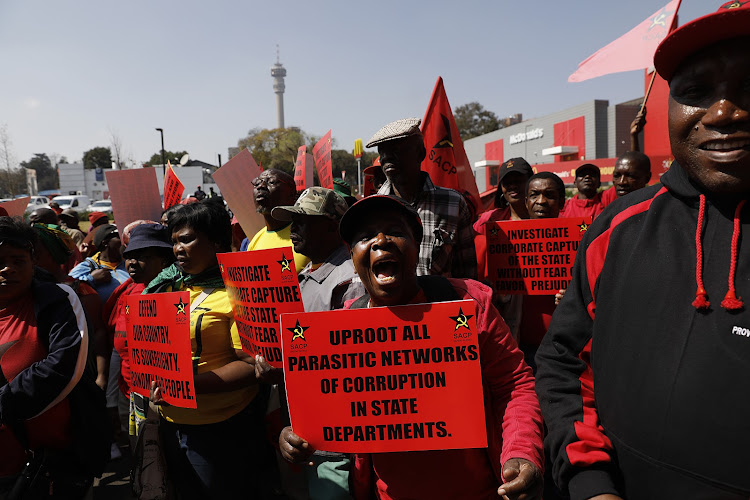 SACP protest outside the building where the State Capture Inquiry is taking place in Johannesburg.
Image: ALON SKUY​

Gauteng SACP secretary Jacob Mamabolo had raised the party’s concerns while handing over a memorandum to the commission outside the Hill on Empire building in Johannesburg‚ where the commission is sitting.

He said the budget of R230-million for the first six months of the inquiry meant the commission could end up spending up to R1-billion should it sit for 12 months. De Wee responded: “It is most important that I assure you that even though it has been six months ... we have not finished the R230m‚ we have not.”

He said the commission would give an explanation should it spend more than R1bn.

Mamabolo warned De Wee that the inquiry could be captured because it was rumoured that more than R10-billion had been shipped out of the country to Dubai and that was enough to “capture” the commission.

“If we can see that you are being captured yourself ... we will come here to tell you‚ ‘it looks like money in Dubai has come here’‚” said Mamabolo.

He said the SACP had marched to the venue to submit a memorandum voicing its support for the probe. In it‚ the party called for the commission to investigate “corporate capture of the state without fear or favour and without prejudice”.

“We urge you as investigators to leave no stone unturned to unearth‚ uproot and dismantle deep-seated parasitic networks that are still lingering within organs of the democratic government and [state owned entities].”