Fate of ANC North West's executive to be sealed soon 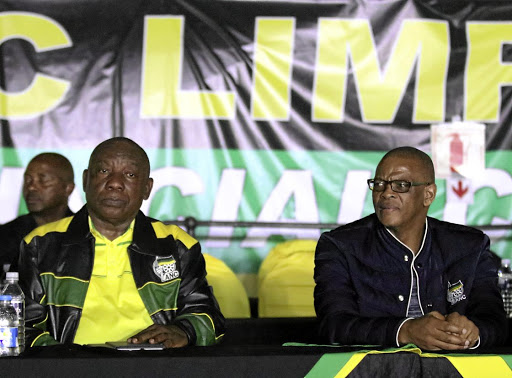 ANC president Cyril Ramaphosa has promised swift action on the party's PEC in the North West. With him is party secretary-general Ace Magashule.

The fate of North West ANC leadership will be decided by top party leaders next week.

On Monday President Cyril Ramaphosa told a meeting between ANC's national working committee (NWC) and provincial leadership that the governing party in that province was divided from the top to the bottom.

Ramaphosa made these remarks in his closing address during the behind-closed- door meeting which was held at Hartbeespoort.

The meeting came after NWC members spent two days in the province listening to branches and regions.

Sowetan understands that the majority of branches and regions have called for the disbandment of the PEC.

The ANC says most of its supporters have confidence in the party despite.
News
3 years ago

"I am still open-minded but you are divided from top to bottom. As leaders, our task is to unite and never do anything to divide the ANC," Ramaphosa allegedly told the meeting.

He is said to have told the meeting that the national executive committee (NEC) of the ANC would make a decision on the future of the North West PEC next week.

Ramaphosa's closing remarks have left the North West leaders wondering what decision would the national leadership arrive at. Speculation is rife that the special NEC - the ANC's highest decision-making body between conferences - would disband the PEC when it meets next week.

However, Kodwa told Sowetan yesterday there was no decision on the North West PEC yet. "We met with the PEC. The PEC was allowed to present its report. The NWC did not discuss the report at all," Kodwa said.

The NWC will meet to consider the report on Monday. This would be followed by the special NEC meeting that would take the final decision.

ANC Youth League provincial secretary Sipho Dial said the league was optimistic that the PEC would be dissolved.

"It is a factional PEC. It is occupied by angry people who want revenge. It may not be able to attract support for people to vote for the ANC in the general elections next year," Dial said.

According to ANC insiders privy to discussions at Monday's meeting, Mahumapelo mentioned ill-discipline among ANC members as one of the problems facing the party. Ramaphosa supporters in the province have been at the forefront of calls for the PEC to be disbanded.

The president's supporters appear to have been emboldened by Monday's meeting and are even hinting that there might be changes in the provincial government if the PEC is disbanded.

"Some of the PEC members were likely to be retained to ensure that there is unity. The PTT (provincial task team) would assess the performance of MECs before reshuffling," one ANC insider said.