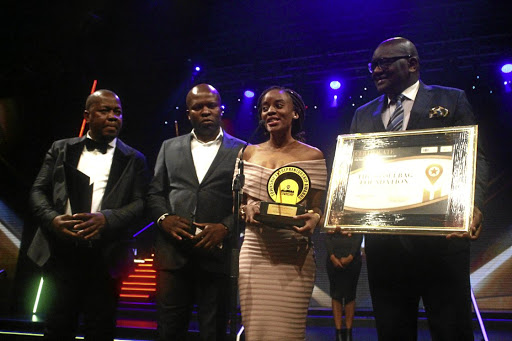 Overall winner of the Gauteng Township Entrepreneur Awards Nokubonga Dlamini is presented with the award at the event at Carnival City on Saturday night. Everyone who was nominated went home with R20000. / KABELO MOKOENA

When Nokubonga Dlamini, 26, of Soweto was approached by a friend to assist him to manufacture circumcision underwear that will help the healing process, she did not think the idea would later grow into an award-winning business.

Dlamini is the co-founder of Stoelberg Foundation, which manufactures medical underwear Circumfort from the back rooms of her house in Orlando West.

On Saturday, she was crowned the overall winner of the Gauteng Township Entrepreneur Awards at Carnival City in Ekurhuleni. Dlamini's business also walked away with the manufacturing business award, walking away with R800000 in total prize money.

The event, hosted by MEC for economic development, environment, agriculture and rural development Lebogang Maile, was attended by Gauteng premier David Makhura and Ekurhuleni mayor Mzwandile Masina, among others.

Dlamini said she started her business in 2015 and now employs nine people.

"We are very proud of our product and we can't wait to grow. The fact that we are supporting nine people who are also supporting their families makes me very proud," she said.

Dlamini said though they did not have the capacity to supply the department of health, they supply NGOs, the private sector and clinics around Soweto with large quantities of the underwear, which costs R30. Dlamini said they produce more than 30000 products a year.

"One of the challenges we face is acquiring manufacturing space.

The township infrastructure does not allow for manufacturing. I believe that we will build our own factory one day. We received a lot of [government] support, we never bought any of the machines we use," she said.

Another big winner was Refiloe Rantekoa, 28, who started Borotho Bakery in White City, Soweto, in 2016.

The business, that employs four people, was awarded the top Start-up and Youth Entrepreneur Award.

"During that year [2016] the bread price was very high. I thought to myself that ordinary people in the township would no longer afford to buy bread," Rantekoa said. "I was employed at the time and I managed to secure a R50000 loan. I bought equipment and hired someone to bake the bread while I continued to work to support the business. Bread is like gold, it is purchased every day," he said.

The awards recognise and celebrate entrepreneurial talent in the township in an effort to build confidence in township business. Premier Makhura said the Gauteng government had a passion for the township economy and was a pioneer in how the country needs to change black empowerment.

"We want to bring township business into the mainstream economy."