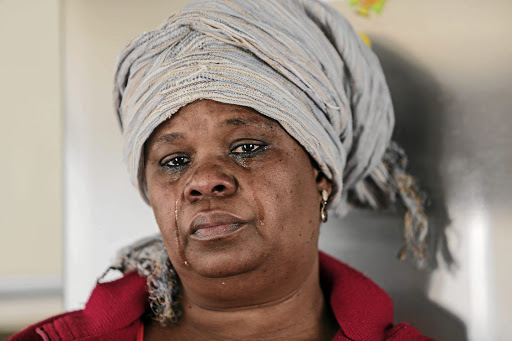 Kamma Dlamini-Pooe sheds tears for her nephew Karabo who was hacked to death by a mob over crime allegations. / Alaister Russell

The family members of one of the three men who were attacked by a lynch mob over allegations of crimes say they felt helpless when their son was viciously beaten to death in Daveyton on the East Rand.

Two men died from the beatings in different parts of the township, while an 18-year-old victim is fighting for his life in hospital with third-degree burns.

One of the two men who were killed, 21-year-old Karabo Pooe, was hauled out of his home in the presence of his family on Wednesday evening.

They said a group of about 500 people attacked Pooe with golf clubs, pangas and shovels as he begged for his life to be spared.

Tshegofatso Pooe, 24, said her younger brother was dragged to a nearby school and beaten to death.

"I demanded to know what they wanted when they were at the gate and they told me to shut up because they know who they were looking for," Tshegofatso said as she spoke of the arrival of the mob.

"They went to the kitchen and found Karabo there and instructed him to come out because he knows what he did."

Pooe said Karabo told the mob that he did not know why they were looking for him.

She said Karabo went outside the house and he was hit on the head with a shovel while another community member was sharpening the edges of his shovel in their yard.

The mother of the 18-year-old man who suffered serious wounds under a burning tyre, could not hold back tears as she briefly spoke to Sowetan ...
News
3 years ago

"They hit him with their shovels and pulled him away from the door as he attempted to flee.

Pooe said the crowd pulled him away from their home to the school and continued to assault him.

Karabo attempted to flee again but was stabbed in the chest.

"I told them to stop because we will pay them for whatever damages Karabo caused but they said he knows what he did and refused to listen to us."

Pooe said the mob then left Karabo on the school grounds and that she saw him taking his last breath.

"When the ambulance arrived they declared Karabo dead," she said as she wept.

She said a high-level task team had been established to stabilise the situation in the township, and also in a bid to make arrests.

Residents told Sowetan that Pooe and the 18-year-old were affiliated to local gangs in the township and a witchhunt was started recently to uproot criminal elements in the community.

"We don't know for sure if Karabo was part of a gang, but he hung out with someone who is known for committing crime in our township," a resident said.

"Sometimes you are guilty by association and maybe that's why he [Karabo] was killed," he said.

A pupil from Daveyton is shaken after witnessing a young man being set alight outside her high school.
News
3 years ago
Next Article