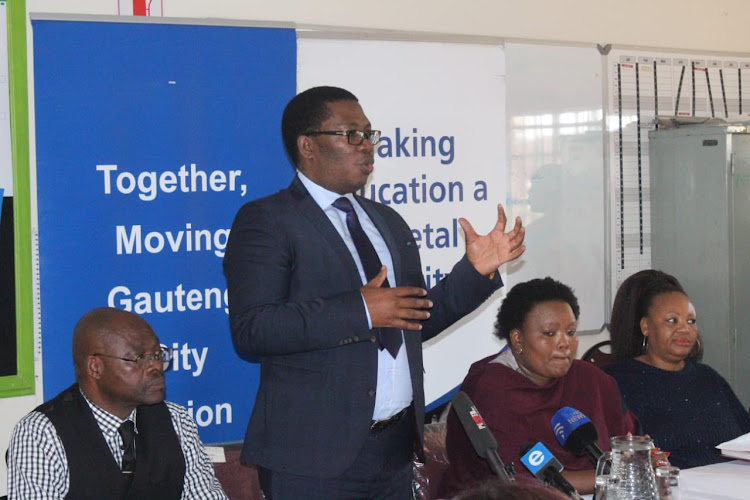 Police and law enforcement agencies have been deployed at a school in Daveyton‚ Ekurhuleni for the next three weeks to help maintain peace.

"Members have been assigned to work 24/7 in the area until the violence has stopped," said Sekele.

This comes after a group of community members forcefully entered the school in search of pupils who they accused of being part of gangs responsible for a number of crimes in the area - including rape‚ robberies‚ brutal murders and house break-ins.

Two men died from the beatings in different parts of the township‚ while an 18-year-old victim is fighting for his life in hospital with third-degree burns.

Lesufi said the two departments had intervened to bring peace to the school and ensure that learning is not disrupted. "We urge the community to cease from disrupting learning‚” he said.

When the mob came to the school‚ principal James Makhubu put his life at risk while trying to protect the pupils.

"That is unacceptable‚” said Lesufi. “We as a department do not condone the violence and the endangering of the lives of our educators. It is with great sadness that this had to happen in this school.”

The family members of one of the three men who were attacked by a lynch mob over allegations of crimes say they felt helpless when their son was ...
News
4 years ago

The mother of the 18-year-old man who suffered serious wounds under a burning tyre, could not hold back tears as she briefly spoke to Sowetan ...
News
4 years ago

Nkosi-Malobane said the Daveyton community had experienced incidents of gang violence over the past 17 years and although the Department of Community Safety had occasionally intervened‚ it was now time for parents to take a stand.

"Teachers are burdened with all these circumstances‚ when they should focus on education. We as a department have not failed‚ but society is failing the children‚" she said.

“It’s time for parents to engage more in raising and grooming their children.”

Pupil Kagiso Mokwathle said the incident had caused a rise in absenteeism at the school because learners were living in fear of being attacked.

"I fear coming to school because the mob is attacking boys from my school. They think we all know the gang members they are looking for‚" said another pupil‚ Monde Mabanga.

Mabanga‚ who is in Grade 11‚ said he missed his tests on Thursday because they were postponed due to the violence.

Lesufi said the school is currently operating as normal. “The preliminary examination is our main focus‚” he said.

“We trust that the police‚ parents and all structures allocated will be assisting us to ensure peaceful learning."