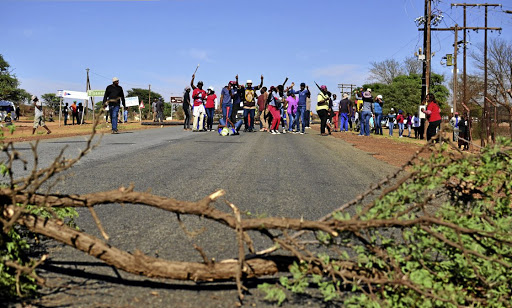 Many communities in North West, such as these residents of Disaneng village, had been staging protests in recent years as they demanded provision of basic services, more so water.
Image: Tiro Ramatlhatse

Municipalities in North West have been forced to readjust their budgets to keep basic services running after illegally investing hundreds of millions of rand with the beleagured VBS Mutual Bank.

"Some of the things like delivery of water and electricity have been hampered. Generally, delivery of services is suffering tremendously."

DA has laid charges of fraud against officials in municipalities for allegedly illegal deposits made with VBS Mutual Bank.
News
3 years ago

The Mahikeng municipality's sum in fact totals R160-million after it invested a further R60-million, which was erroneously paid into its account by the department of cooperative governance and traditional affairs (Cogta), with VBS.

"What is even problematic is that the four municipalities did not only invest money belonging to them. Cogta erroneously paid R60-million into the account of Mahikeng municipality and instead of transferring it back they decided to invest it with VBS."

Mahlakeng said some municipalities used municipal infrastructure grants which are meant for basic water supply facilities to invest with VBS.

"In Dr Ruth Segomotsi Mompati district municipality R60-million which was meant for water was invested with VBS. In the area people are struggling. There is no water."

On Wednesday, Scopa hauled the four municipalities before it to account on how and why they invested with VBS.

DA's North West leader, Joe McGluwa, said: "It is clear that VBS was a front for corruption."

EFF member of the legislature Alfred Motsi said what has happened was the result of ANC cadre deployment.

"The ANC was supposed to have fired the mayors, municipal managers and chief financial officers of those municipalities a long time ago," he said.

ANC North West deputy chairperson Sello Lehari said the party would take action against the officials as soon as they get a report from local government and human settlements MEC Galaletsang Gaolaolwe and Cogta minister Zweli Mkhize on whether proper procedure was followed when investing with VBS.

In his state of the province address last year, former North West premier Supra Mahumapelo revealed that the province was in discussions with VBS on the role they can play in strengthening VTSD (villages, townships and small dorpies) economies.

At least 14 municipalities in the country invested a combined R1.5-billion with the bank which gained prominence after granting former president Jacob Zuma R7.8-million home loan.

The bank was placed under curatorship by finance minister Nhlanhla Nene earlier this year after it emerged that it had looted allegedly by its executives, and the Venda King Toni Mphephu Ramabulana, who were allegedly living it up on the bank's account.