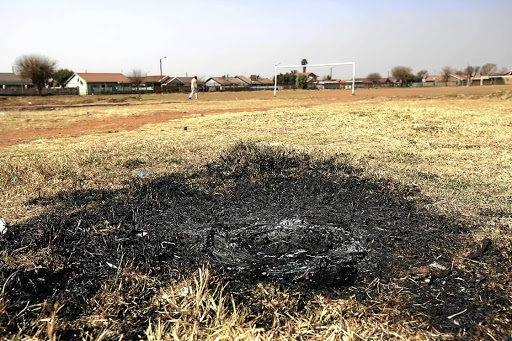 The scene where an 18-year-old man survived necklacing by a mob in Daveyton, East Rand. /Alaister Russell

The mother of the 18-year-old man who suffered serious wounds under a burning tyre, could not hold back tears as she briefly spoke to Sowetan yesterday about the vicious attack on her son.

Earlier on Wednesday, she had watched helplessly as her son was assaulted, doused with petrol and set alight by a mob in Daveyton.

He is now in a critical condition in hospital with third degree burn wounds.

"A neighbour called and told me that my son was being attacked by a mob and that I needed to go and stop them because they were going to kill him," the mother said.

The woman, who cannot be named to protect her son's identity, said her heart broke when she saw them putting a tyre around his waist before dousing him with petrol and setting him alight.

"I asked them why they were attacking him but none of them responded. I could only watch because there were a lot of them," she said.

The family members of one of the three men who were attacked by a lynch mob over allegations of crimes say they felt helpless when their son was ...
News
3 years ago

A pupil from Daveyton is shaken after witnessing a young man being set alight outside her high school.
News
3 years ago

A community member who asked not to be named said the 18-year-old was affiliated to the local gang, the "Freaks", and the community wanted him to point out the rest of his gang members.

"That boy is part of the Freaks gang. They go around robbing and injuring people.

"The community is fed up and want to clean up the township," he said.

Meanwhile, the second victim, Njabulo Buthelezi, 20, was dragged out of his neighbour's house and beaten to death in the presence of his father, Jeremiah Mbuyisa, on Saturday night .

Mbuyisa said his son worked at a local Pick n Pay store and was not a gangster.

"I raised him in a Christian home as I am a pastor. I would never allow him to be part of criminal activities. I think he was attacked because of his friend who the crowd was looking for. They said Njabulo allegedly robbed them last month," he said.

Mbuyisa said he attempted to stop the mob but one of them pulled out a gun on him.

"They pulled out a gun and chased me away. I was helpless as there were a lot of them, I could not stop them."