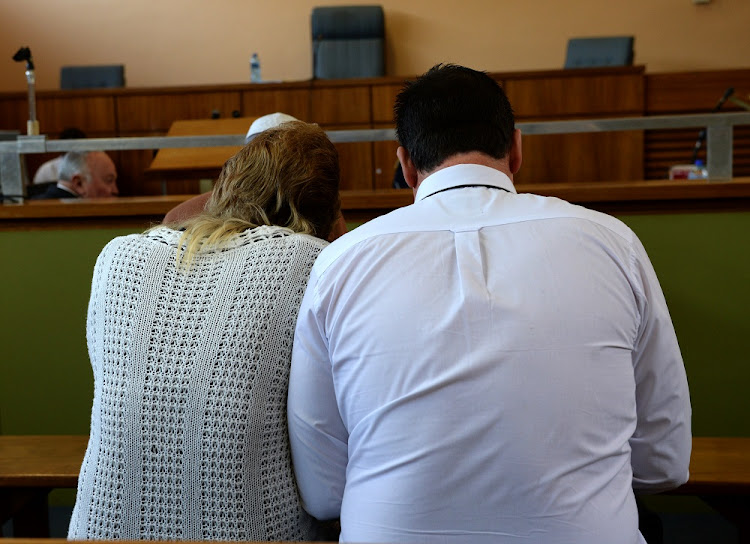 The man and woman of the Springs "House of Horrors" appears in the Delmas High court on May 18, 2015.
Image: Gallo Images / Beeld / Denzil Maregele

The couple who kept their five children locked up in what was dubbed the Springs "house of horrors" were on Thursday found guilty of a string of charges.

Four years after the traumatic details of what unfolded in the house first made headlines‚ Judge Eben Jordaan at the High Court in Pretoria went through the evidence that was delivered in the trial. It included how the couple's children were burnt with blow torches‚ tied into a closet and kept handcuffed to a pool table.

Jordaan handed a guilty verdict to the man for abusing and neglecting his children.

The court heard of how he had cuffed his son and pepper-sprayed him‚ dunked him in water and deprived him of food. The 11-year-old boy had on some occasions been suspended by his hands and feet by chains from poles‚ and was whipped and beaten with a knobkerrie. For these grievances‚ the man was found guilty of attempted murder.

The court had also heard chilling evidence of how he had sexually abused his daughter by touching her private parts‚ performing oral sex on her and had even trying to penetrate her. For this he was found guilty of rape.

In his lengthy judgment‚ Jordaan detailed how the children were not properly fed‚ had no friends‚ did not attend school and lived in filthy‚ rat-infested conditions.

The North Gauteng High Court on Friday heard how a used-car salesman and father of five had strung his 13-year-old between two steel pillars‚ ...
News
5 years ago

His wife‚ who had also been charged of the attempted murder of their son‚ was found not guilty of this charge.

The woman‚ who had kept secret the trauma suffered by her children‚ was found guilty of defeating and obstructing the ends of justice.

While she was handed a not-guilty verdict for child abuse‚ she was found guilty of five counts of child neglect‚ as well as the possession of drugs.

Following court proceedings‚ when asked whether they intended to challenge the conviction‚ the woman's lawyer Henry Prinsloo said: "We will have to get instructions‚ but at this stage I don't think so."

The horror was initially revealed when the 11-year-old boy escaped from their home and alerted neighbours.

On Thursday‚ one of the couple's children was in court to hear the verdict and quickly left after the proceedings.

The mother‚ who was released on bail several years ago‚ is still out on R2 000 bail. Her bail conditions‚ which include that she does not have any contact with her children‚ remain in place.

The matter will return to court on October 1 for sentencing proceedings.

The man remains behind bars.