'Called by the k-word, locked in container' 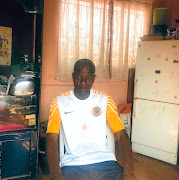 Image: Tankiso Makhetha Simon Mongwe says he was humiliated after being called by the k-word by a colleague at work.

A 46-year-old man was allegedly locked up in a shipping container by his boss and colleague, who wanted to force him to drop a crimen injuria charge against the colleague, who had called him by the k-word.

Simon Mongwe, a tracking device technician, alleged that his colleague, Orket Botha, called him by the k-word after he (Botha) found him (Mongwe) working in a prohibited section of Eskom's Rosherville Research and Innovation Facility in Germiston, Ekurhuleni, on January 9.

He then opened a case against Botha.

Mongwe said his humiliation was compounded about a week later when he was locked up in a container by their boss Farhad Mahommed and Botha for close to an hour as the two attempted to coerce him to drop the charges.

Botha has, however, branded Mongwe a liar. "I have never in my life called anyone the k-word. I flatly deny these allegations."

Botha said he only reported to Mahommed that he caught Mongwe red-handed working in a prohibited area.

"How could we lock him up in there when we were also in there with him? It doesn't make sense," he said.

Botha said he had been on suspension since January 17 and was awaiting disciplinary processes against him to be concluded. "I might lose my job over these lies. I am very disappointed with what he is accusing me with," he said.

Mahommed also denied locking up Mongwe inside the container.

Mongwe said the facility had just been reopened after the festive season holidays, and he wanted to move one of the vehicles that had been parked in the prohibited area when he was locked up.

"It [the car] had not been used in about two weeks and its battery was flat, so it couldn't start," Mongwe said.

He said he opened the vehicle's bonnet to investigate what the problem was so he could move it from the prohibited section of the centre, but Botha walked in on him and insulted him.

Mongwe said Botha proceeded to refer to him by the derogatory word on two subsequent occasions, which prompted him to press charges of crimen injuria at the Cleveland police station.

"Botha and Mahommed found out that I had opened a case. They then took me to the container where they locked me up for about an hour.

"It was a hot day and there are no windows in there for ventilation. They threatened me to drop the charges. I didn't, and I haven't been able to get any work at Eskom since April," he said.

Police spokesman Captain Johan Jordaan confirmed the matter was being investigated and that it was before the Jeppestown Magistrate's Court.