Presidency hints it may ask Zuma to ‘pay back the money’ 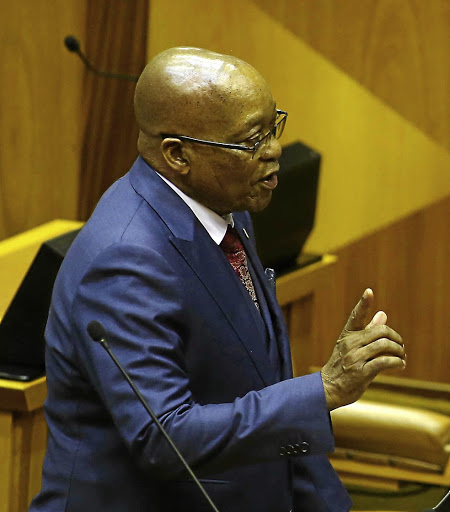 The Presidency has hinted that it may seek a legal fees refund from former president Jacob Zuma – depending on the outcome of a court challenge to state funding of his corruption trial defence.

It has also admitted that large amounts of documentation linked to the state’s multimillion rand funding of Zuma’s legal fees are missing‚ or have been destroyed “due to their age”.

The Presidency says government has paid a total of R16.7-million for Zuma’s legal fees‚ but it is likely that this amount will disputed.

President Cyril Ramaphosa is not opposing court bids by the Democratic Alliance and Economic Freedom Fighters to stop the continued state funding of Zuma’s corruption trial defence‚ which Zuma insists he is constitutionally entitled to.

Zuma’s lawyer‚ Daniel Mantsha‚ says this is because he stands accused of abusing his public office to commit corruption‚ and this means the charges against him are linked to his position in government.

Director-General in the Presidency Reginald Lubisi states in an explanatory affidavit filed on Tuesday that this funding was given to Zuma according to the provisions of the State Attorneys Act.

Former president Jacob Zuma’s lawyer says he is entitled to state funding for his corruption trial defence.
News
3 years ago

“The rationale for state funding of an official’s legal costs is to recognise that there are circumstances where an official is exposed to the risk of litigation by virtue of his or her office no matter the rank. The official should not be liable for claims arising from acts committed in the course and scope of his or her official duties.”

He adds that this funding would be forfeited if it could be shown‚ among other things‚ that the accused official “did not act in the course and scope of his or her employment”.

Lubisi has sought to explain Ramaphosa’s stance on the case‚ and detailed why the Presidency has failed to provide a full set of documents linked to the 2006 decision to fund Zuma’s fees.

Lubisi said the Presidency had done its best to locate documents that recorded the fees deal – and how it was applied – but had challenges in doing so. He said Zuma’s former lawyer‚ Michael Hulley‚ was asked to assist‚ but did not respond to two written requests from the Presidency for help.

According to Lubisi‚ the payment of Zuma’s fees began as early as 2004‚ when the Presidency paid for a lawyer to monitor the criminal trial of Zuma’s former financial advisor‚ Schabir Shaik‚ who had been charged with corrupting Zuma.

When Zuma was charged with corruption in 2005‚ former justice minister Brigette Mabandla advised then president Thabo Mbeki that he qualified for state funding of his defence.

The Presidency went on to fund multiple unsuccessful cases bought by Zuma‚ in which he sought to challenge the search and seizure raids conducted by the Scorpions on his and his lawyers properties‚ as well as the Scorpions’ efforts to secure evidence against him in Mauritius.

He also‚ among other things‚ took the NPA to court for failing to seek representations from him about why the case against him should be dropped.

All of these cases ultimately ended in failure.

But‚ while Zuma has agreed to refund the state if he is ever convicted of corruption‚ it appears unclear if he was ever asked to pay such a refund for multiple failed civil applications linked to the case.

“It is correct that the Presidency has not yet requested a refund of any of the funding provided to Mr Zuma‚” Lubisi said. “We await the outcome of this litigation before we do so.”