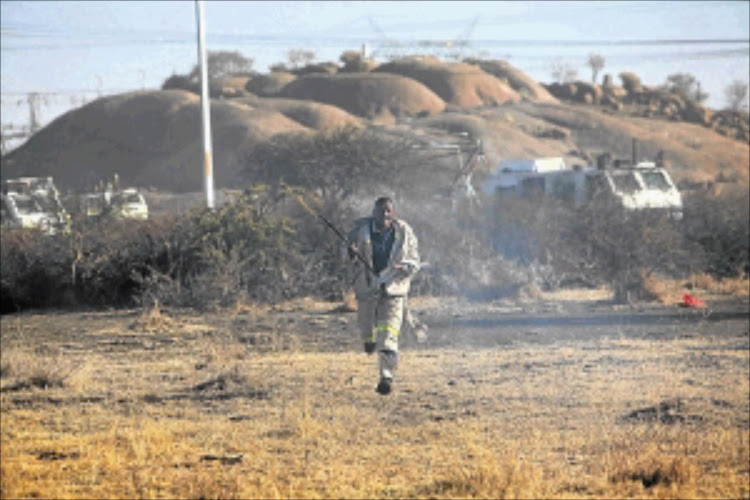 File photo of a mineworker running away from police armoured vehicles. He was among thousands of Marikana miners who had gathered to protest for a pay increase.
Image: ALON SKUY

The Institute for Security Studies (ISS) has found that police officers involved in the bloody Marikana massacre six years ago were not under threat by the striking miners.

This was revealed in a report released in Pretoria on Wednesday.

The research‚ titled “Sound of Gunfire”‚ was guided by photographs‚ witness accounts and forensic evidence presented to the Farlam Commission about the events of August 16‚ 2012. The research claims to know why the miners were shot.

Unpacking what happened at Scene Two‚ where 17 of the 34 striking workers were shot dead‚ David Bruce‚ an independent researcher and expert on Marikana and policing‚ said the shooting was not justified. Rather‚ he said‚ it was motivated by the desire to punish strikers for the killing of two police officers earlier that week.

He said evidence before the Farlam Commission did not enable it to reach a conclusion that the strikers had been attacking the police. The commission disagreed with the evidence by the police as it could not corroborate the forensic evidence the commission had.

The commission rejected the account of events presented by the SAPS - “but beyond that the commission had not provided a significant account of what happened at scene two‚” Bruce said.

Re-enacting the scenes‚ Bruce said the first shooting took place close to the cattle kraals at the bottom of an informal settlement called Nkaneng. He said that there were 49 police shooters‚ including 47 members of the Tactical Response Team (TRT). Live and less lethal ammunition was also shot by Public Order Policing (POP) members.

Scene One took place at a small kraal. There‚ at least 17 miners were shot dead. More than 305 live rounds of ammunition were fired by the police‚ with 247 of them from R5 rifles. The shooting took place a few minutes before 4pm on the day‚ and lasted eight to twelve seconds. The miners then moved.

At Scene Two‚ which took place at what he labelled Koppie 3‚ there were 57 police from four different SAPS units - 11 from the TRT‚ 24 from the National Intervention Unit‚ 11 from the K9 and 11 from POP. Seventeen miners were shot dead at Scene Two‚ with 295 live ammunition shot. The scene occurred 15 minutes after the first scene and lasted for 11 minutes. Unlike at Scene One‚ Scene Two took place away from the media.

The government has offered families of the slain Marikana mine workers a R100m settlement.
News
3 years ago

Bruce concluded that‚ because of this‚ police may have believed they could act with impunity. “It is likely that many of the police approaching Koppie 3 (scene two) believed that the strikers had attacked the police at the small kraal (scene one). When the TRT line fired at scene one‚ the NIU were 80 metres behind them. From this position it may have appeared that the strikers were attacking‚” he said.

He said police may have been uncertain and feared yet another attack if they engaged the strikers - or perhaps they acted out of vindictiveness. He said police had been attacked twice by strikers on August 13‚ and on August 16.

In the absence of an immediate threat‚ the responsibility of police was to take cover and identify the source of the shooting. Instead they fired lethal R5 assault rifle rounds into the area where a large number of men had gathered. “This was reckless in the extreme‚” said Bruce.

The Farlam Commission recommended that the Independent Police Investigative Directorate (Ipid) reconstruct the scene under the guidance of the director of public prosecutions with the view of determining what happened and who could be held liable for the deaths and injuries that occurred there. “To date this has not happened. In April this year‚ Ipid told Parliament it they did not have the budget to reconstruct the scene. Until today there is no detailed account of what really happened‚” said Gareth Newham‚ head of justice and violence prevention at the ISS.

Judge Ian Farlam‚ chairperson of the commission of inquiry into Marikana and who attended the seminar said: “Prima facie indicates that those that fired at Scene Two were not doing so in self-defence.”

Farlam said his commission rejected a submission by police that they did not know what happened at Scene Two when the operation should have been stopped at Scene One.