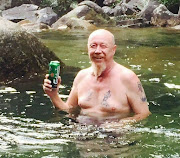 A suicide note was found on the scene where the body of Mark Minnie‚ a former Port Elizabeth policeman and co-author of the recently released book‚ The Lost Boys of Bird Island‚ was found.

The body of Minnie‚ 58‚ was found near a bush at the back of a Theesecombe small holding by the owner of the property with whom he was staying on Monday night.

A firearm found near Minnie’s body is believed to belong to the owner of the small holding and a former police colleague of Minnie‚ Brent Barnes.

Police spokesman Captain Johan Rheeder told HeraldLIVE that Minnie had arrived to stay with Barnes on the small holding on Monday morning.

“He went there on Monday morning asking to stay for a few days stating that he wanted to get out of the city for a short while to relax‚” Rheeder said.

“During the course of the day‚ the owner of the farm went out and continued to do his daily work. Later in the day‚ a farm worker heard a gunshot and reported it to the owner‚ however he did not think anything of it.”

On Monday evening‚ a female friend contacted Barnes‚ asking if he had seen Minnie as she was struggling to get hold of him.

“The owner (Barnes) then went to go look for him (Minnie). They searched the house and could not find him which is when they went outside to search the surrounding area.”

Rheeder said that at about 8:50pm his body was found near a tree‚ on the farm‚ with a pistol lying near to the body.

“At this stage it appears that there is no foul play‚ however investigations are ongoing.” Rheeder said that a preliminary inquest investigation was under way pending the coroner and forensic report.