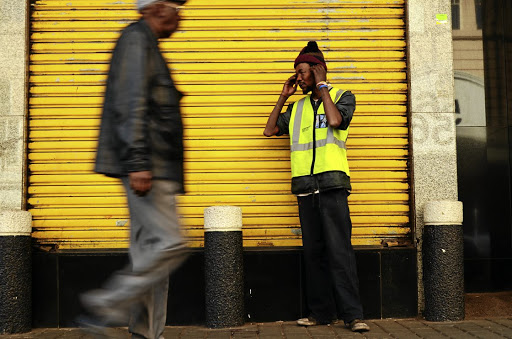 Sam Deseko witnessed his friend being allegedly beaten to death by a motorist in Johannesburg. / Mduduzi Ndzingi

A car guard who witnessed a vicious attack on his colleague has described how the deceased endured a beating from an angry motorist who jumped on both his feet, thudding into the fallen man's face.

Yesterday, motorist Philani Milton Mkhulisa, 25, appeared in the Johannesburg Magistrate's Court facing a murder charge. His case was postponed to August 22 for bail application. His victim is yet to be identified as no one appeared to know who he was.

The guard, according to his colleague Sam Deseko, started working on the streets to assist with parking cars two days before he was allegedly killed. The guard's brutal assault was as a result of being suspected of theft out of Mkhulisa's vehicle.

Deseko, who works along Pritchard Street in the Johannesburg CBD, said his colleague's assault lasted for an hour.

Deseko said he was busy washing a car when he saw his colleague running for his life on the evening of August 7.

"I saw him being chased by this guy. He ran into Joubert Street and it was there that he caught up with him. He started beating him up. He asked him, 'where are my things?' He continued to beat him up. His girlfriend tried to stop him but he did not want to listen.

"He brought him back to Pritchard Street and continued to beat him up. I have never seen a man so angry in my life. My friend's head was on the pavement and he stomped on him with both his feet. I tried to tell him that you cannot beat up a man this way, no matter what he has done but he did not listen."

Deseko said the car guard was then left bleeding on the pavement along Pritchard Street. "I went to him [Mkhulisa] and asked that he goes and see the guy because he was badly hurt. Instead, he said I should go and speak to him and ask him where he put his stuff. I went to check the guy but he could not speak. He was profusely bleeding from his mouth," said Deseko.

Mkhulisa then allegedly left the scene with his girlfriend.

It is about 10am in Ivory Park‚ the taxi rank is busy and commuters are coming in and out en masse in this Johannesburg township.
News
3 years ago

Msimanga said it could not be right that taxpayers’ money is lost through negligence.
News
3 years ago

WATCH: Security guard survives after car crashes into him

A Johannesburg security guard who was deployed to be on the lookout for suspicious vehicles in the Morningside area is lucky to be alive after he was ...
News
3 years ago

His victim leaned against the wall and tried to walk down Pritchard but collapsed where the road meets Rissik Street. The blood from the last Tuesday incident could still be seen on pavement yesterday.

Deseko said he went to the McDonald's outlet where they helped him call the ambulance. About 30 minutes later, Mkhulisa allegedly returned with two guys.

"The two guys demanded to know why I called the ambulance. As you can see they tore my jacket trying to force me into the car. Fortunately, there were security guards who were now on the scene and stopped them," Deseko said.

Deseko said even on his return, Mkhulisa never checked on the man he had beaten.

Deseko left before the ambulance could arrive. When paramedics finally arrived, they certified the car guard dead on the scene.

Mkhulisa had parked his Toyota Yaris at the corner of Rissik and Pritchard streets.

His victim allegedly demanded money from him to guard the car. He refused and when he returned he realised that the window of the car had been broken and two bags which were in the car were missing, and that is when he became angry.

Police said in the bags were toiletries, his ID book and matric certificate. Mkhulisa handed himself over to police on Friday after police visited his home in Alexandra.

When he emerged from the dock in a black jacket, Mkhulisa glanced at the public gallery to see if his family was there and then stood quietly before the magistrate.

Police spokesperson Captain Xolile Mbele said the victim was yet to be identified and his age was estimated to be between 24 and 26.