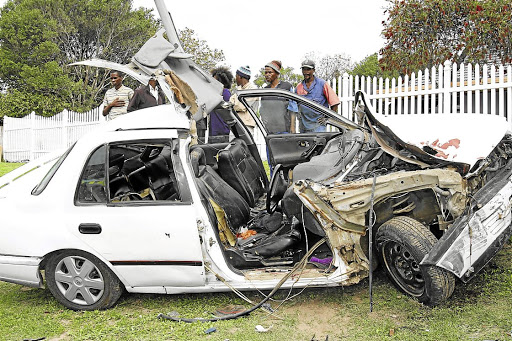 The RAF may change its rules to allow people who cause accidents to also claim compensation. But that is only if the Road Accident Benefit Scheme Bill is passed into law.
Image: SINO MAJANGAZ/Daily Dispatch

People injured in vehicle crashes may soon be able to claim from the Road Accident Fund (RAF) without having to prove they were in the right.

The state insurer will soon do away with investigations on who caused the accident if the proposed bill is passed.

The Road Accident Benefit Scheme Bill is currently out for public comment.

Parliament's portfolio committee on transport will conclude its public hearings on the bill in the Western Cape this week.

Chair of the committee, Dikeledi Magadzi, said the bill aimed to establish a benefit scheme to deal with RAF claims. "The bill proposes that it should become a no-fault-based scheme. This means the benefit scheme will focus on the accident, not who was at fault," Magadzi said.

The bill also proposes the involvement of other departments such as social development and health to help the victims after the accidents, she added.

"[If the bill is passed] there will be an administrator. You put your claim directly to the administrator," Magadzi said, adding that many claimants did not know they could do this and therefore went through lawyers, who would then receive the money on their behalf.

Road Accident Fund to speed up payment for victims

The families of the 20 people who perished in a car crash in Mpumalanga can claim for funeral benefit and compensation from the Road Accident Fund ...
News
4 years ago

The proposed bill also wants the government to stop paying attorneys who claim on behalf of clients.

"The bill says if you believe that you do not need to go directly to the administrator and you choose to use lawyers, that money [to pay the lawyers] will come out of your own money," Magadzi said.

Magadzi said the committee had received many inputs from the public, among which were for the RAF to consider costly cultural activities done during funerals, and the money people have to pay when moving a corpse from one province to another.

The proposed legislation has also amended its foreign nationals' benefit.

"When foreigners are involved in an accident, the bill says they will be considered like a South African. [However], it goes further to say if you are married to a non-South African who is staying, for argument's sake, in Lesotho and you are involved in an accident, your beneficiaries in Lesotho will not be entitled to a payout beyond funeral costs.

"We cannot maintain them while they are in a foreign country. If those people were in South Africa, irrespective of their nationality, they would enjoy the full benefits."

Lawyers' organisations have criticised the bill. Magadzi said the committee was aware of issues they raised.

"The lawyers are not happy because it looks like they will not get work as some people may choose to go directly to the administrator. But in all the provinces we have visited, people complained about the lawyers. One woman was crying to say they [a law firm] gave me a fake cheque of R20000. She then went to the RAF, only to find that the lawyers had taken R1.2-million for themselves."

Documents in possession of the Democratic Alliance reveal that the Road Accident Fund (RAF) has proposed to its Board that a 30% bonus be given to ...
News
4 years ago

But the Black Lawyers Association (BLA) said the government was introducing measures that would be detrimental to claimants.

"The bill suggests that there will be no assistance by the administrator for legal expenses to the victims and also other professions like doctors, industrial psychologists and occupational therapists. The poor who are going to have access to lawyers and experts are going to be fairly compensated. [In the bill] claimants are forced not to need a lawyer," BLA president Lutendo Sigogo said.

"The Road Accident Fund Act says there are two people who can claim - the lawyer and/or the claimant. There is no change of policy in that regard. When a lawyer claims for you, the RAF, in order to safeguard your award, also contributes to the legal fees for the lawyers. They are going to take away that contribution to the lawyer. This means that the client will be more exposed to costs," he said.

Sigogo said it was not true that claimants would get more money without a lawyer.

"We've done an analysis of the claims in the country, comparing 20000 claims made through lawyers against 20000 claims made without legal representatives. Those represented by lawyers were paid close to R20-billion. Those who made claims on their own were paid R2-billion."

The portfolio committee plans to finalise the bill by the end of October.