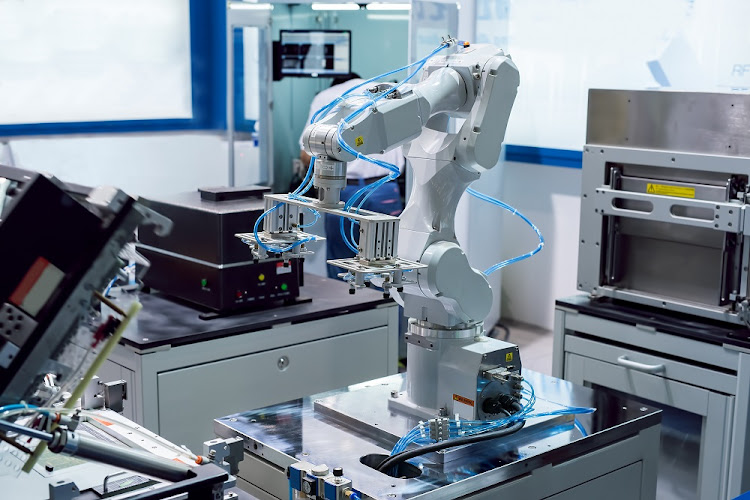 This picture of a robotic hand machine tool at an industrial manufacturing factory is being used for illustrative purposes only.
Image: 123RF/wklzzz

Gauteng e-government spent nearly R5-million to send 45 students, including relatives of its senior officials, to study in Germany for a programme some allegedly did not qualify for.

The e-government department sent them in November 2016. The students were enrolled for the Artificial Intelligence and Robotics (AIR) course at Pforzheim University after a company that dealt with artificial electric immobility, IBA Global, had made a proposal to the department.

IBA Global president Emily Vollmer told Sowetan she had taken 120 students, 45 of whom were sponsored by the department, for training in Germany, but only 13 had passed. "A lot of people that came to us were chosen for us by officials ... a lot of them were relatives of e-government [employees]," Vollmer said.

Some of the students selected did not even have matric, while others had no basic computer competency and were not fluent in English as per the basic requirements.

However, the students say they were promised employment after the programme, which Vollmer disputes. "They were all told that it's performance-based. "If you don't perform, you [are] out," said Vollmer.

The little robotic waiter wheels up to the table, raises its glass lid to reveal a steaming plate of local Shanghai-style crayfish and announces in ...
News
2 years ago

A student who spoke on condition of anonymity accused the department and IBA Global of not being transparent. "We were promised permanent employment ... but for some reason, the programme was dissolved after six months of training."

The department has, however, blamed IBA Global and accused it of not fulfilling its commitment to employ the students. "If IBA Global promised permanent employment, they must explain why they did not honour their promise," said John Sukazi, spokesperson for Gauteng finance MEC Barbara Creecy.

Vollmer said she had employed the students who had passed, while the e-government's department employed the "failed" students in another youth programme. "I permanently employed 13 people and they are still in my employment," said Vollmer.

The students flew to Germany on November 26 2016 and returned on December 4 2016. They started an ICT development programme from January 2017 to April 2017 upon their return. Sukazi said those not employed by IBA were given a year's contract on another ICT programme.