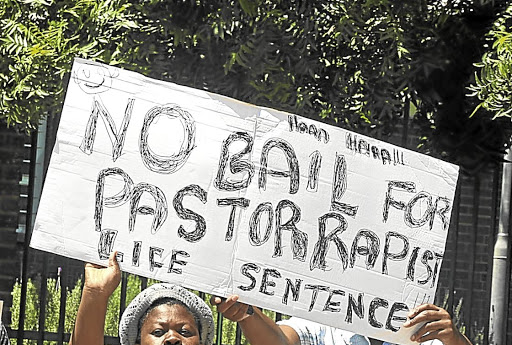 A Thohoyandou pastor accused of raping a teenager was denied bail yesterday. The protesters in this file picture call for a court to deny a pastor bail in a previous case.

A Limpopo mother whose daughter was allegedly raped by a local pastor wants him to rot in jail.

The 38-year-old mother from Tshifulani village outside Thohoyandou, who is based in Johannesburg where she works as a hawker, told Sowetan that her 16-year-old daughter wasn't even a member of the church.

"I want him to go to jail. My daughter is hurt because a pastor destroyed her life. What he did to her will haunt her for the rest of her life," the mother, who cannot be identified, said.

She said she was informed by a neighbour and the police about the incident.

Police said they had arrested the suspect.

The 31-year-old is a self-proclaimed prophet and a Zimbabwean national.

Colonel Moatshe Ngoepe said it was alleged that the suspect lured the victim to the church in Dzwerani village. He said the suspect claimed he could offer the victim divine intervention for her problems.

On her arrival, the suspect took her towards the church and allegedly raped her and forced her to wear black clothing from the bag he was carrying before entering the church with her," Ngoepe said.

"Inside the church, there were some unknown congregants, all wearing black clothes as well."

Two members of the church Sowetan spoke to denied the allegations levelled against their "prophet".

"We don't think he did it because there is no minor who can go and seek divine intervention without their parents' presence. We are shocked too. We know him as our good prophet who helps the sick," said one of the congregants.

Another one said the prophet arrived in Tshifulani in June and started his church the same month.

"He rented a house in the village and we would hold our church service in a tent in his yard twice a week. In our church we don't wear black or any uniform and we are not more than 50 members," said another congregant.

But another member said: "If indeed he raped her, Satan has taken over him and the devil is playing with his life."

"We can't have prophets who go around abusing children. The law must take its course and make sure the perpetrator is sent to jail," she said.

Rafendedza said it was the first time she had heard about the church.

The suspect was denied bail when he briefly appeared in the Thohoyandou Magistrate's Court yesterday. His case was postponed until next month.