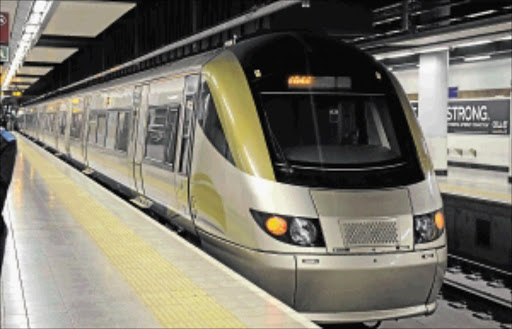 The Commission for Conciliation‚ Mediation and Arbitration’s attempts to break the deadlock between Gautrain operator Bombela and trade union United National Transport Union (UNTU) was unsuccessful‚ Bombela said on Tuesday.

Workers at Gautrain are in the second week of a strike in which they were initially demanding a 10% increase‚ a housing allowance of R1‚600 a month (up from R750 a month)‚ a R20‚000 unconditional bonus per employee‚ increases in nightshift allowances and a night-work transport subsidy.

“The union abandoned discussions‚ rejecting two additional‚ enhanced offers tabled by the [Bombela]‚ both of which made provision for an incentive bonus‚ which UNTU had been requesting‚” Bombela spokeswoman Kesagee Nayager said in a statement.

However‚ UNTU secretary general Chris Harris denied that the union had abandoned talks.

“We never left the negotiating table. The CCMA spent three hours with the employer while our negotiators remained in a separate boardroom.

“Thereafter‚ the employer came up with the revised offer over three years‚ while all along we were negotiating for a one-year deal.”

The United National Transport Union (Untu) has threatened to intensify its wage strike against Gautrain.
News
3 years ago

Harris said the union then went back with the revised three-year wage offer to its members.

“Our members do not want to negotiate a three-year wage deal with the employer‚” Harris said.

Harris said it was still prepared to negotiate‚ as it had reduced its demands to a 9% salary increase‚ a R1‚400 housing allowance and a once-off bonus of R15‚000.

Bombela said it reiterated its calls‚ and those of UNTU‚ for intimidation and attempted acts of sabotage to be stopped with immediate effect.

“In addition to working with the relevant authorities to apprehend those involved in criminal acts in an attempt to sabotage the service‚ [Bombela] has reinforced safety and security measures to ensure that workers‚ passengers and the Gautrain assets are not compromised‚” Nayager said.