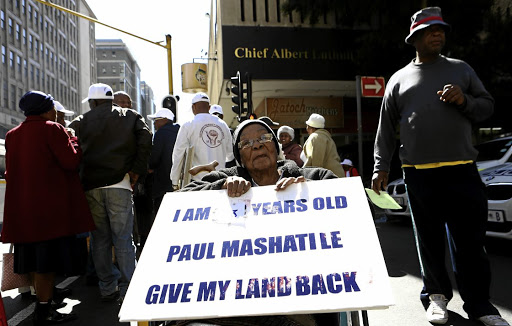 This is the remark by 80-year-old Alexandra pensioner Ethel Mngomezulu, who claims that about 2554 people in the area are owed title deeds by the government.

Speaking yesterday at the doorstep of Luthuli House, the ANC headquarters in Johannesburg, Mngomezulu accused the land commissioner, former Gauteng human settlements MEC and now the party's treasurer-general Paul Mashatile and former City of Joburg mayor Parks Tau of signing a deal which they did not adhere to.

"We want that land back because government is aware that we claimed the land and signed a statement of intent," said Mngomezulu of the Alexandra Property Owners Rights group.

The deal Mngomezulu referred to is the historic R2-billion land claims agreement which was reached between disgruntled Alexandra Property Owners, the City of Joburg and the department of human settlements, which was meant for the redevelopment of Alexandra through the Alexandra Renewal Project.

According to reports, a large-scale government development planned under this project ground to a halt when the Alexandra Land and Property Owners Association (Alpoa) - representing over 500 property owners - got a court interdict stopping any infrastructure development in the old section of the township.

Mngomezulu, who was flanked by other elderly people, said they will bring the city to a standstill if government failed to return the land back to them.

"If they fail to treat this matter with the urgency it deserves, they have something coming their way," she said.

Another elderly woman, Beauty Mabe, 70, from Alpoa, said they were tired of empty promises from the government.

"We started in 1998 with these negotiations to the extent that we had to renegotiate again in 2010 where they promised us that they will fix this issue. Fast-forward to 25 June 2016 which really got me frustrated, was when Parks Tau and Paul Mashatile committed to solve this problem speedily," she said.

Human settlements director Sam Mahatlane vowed to have round-table discussions with all previous and current stakeholders next week Tuesday to "urgently deal with the matter".