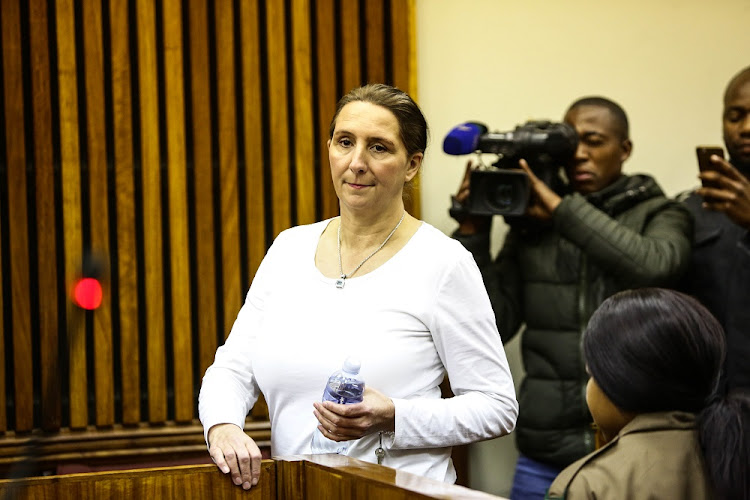 Vicki Momberg appears at the Randburg Magistrates Court in Johannesburg to apply for bail pending the appeal of her prison sentence for a racist rant that was caught on camera in 2016.
Image: Alaister Russell/The Sunday TImes

Convicted racist Vicki Momberg was on Thursday granted bail of R2 000 by the Randburg Magistrate’s Court‚ pending the outcome of an appeal against her conviction and sentence.

The state had chosen not to oppose bail in the case against the country’s first convicted racist‚ saying she would soon be due for parole anyway.

Momberg‚ a former estate agent‚ applied for bail in the Randburg Magistrate’s Court after being granted leave to appeal both her conviction and sentence by the High Court earlier this week.

Dressed in white t-shirt and black pants‚ she looked fresh-faced with a touch of make-up and her hair tied back when she appeared before magistrate Pravina Raghoonandan‚ who had originally sent her to prison.

Addressing the court‚ prosecutor Yusuf Baba said he had already discussed the matter with Momberg’s lawyer‚ Kingdom Onah‚ and they had agreed that it was pointless to oppose bail because Momberg had already served four months of her two-year sentence‚ which would mean she would soon be liable to apply for parole.

Baba also pointed out that Momberg had been out on warning during the trial and never missed a court appearance.He added that she was not a flight risk.

Momberg had filed for leave to appeal by challenging the video evidence which was presented before the court‚ alleging that it had been tampered with.

She had also told the High Court that Raghoonandan failed to take into account her lack of intention and a psychologists’ report which had been issued. She had further argued that the sentence handed to her was excessive.

The former real-estate agent was caught on camera hurling the k-word at black police officers and 10111 operators after she was the victim of a smash-and-grab incident. She used the k-word more than 48 times. The clip went viral and Momberg was arrested.