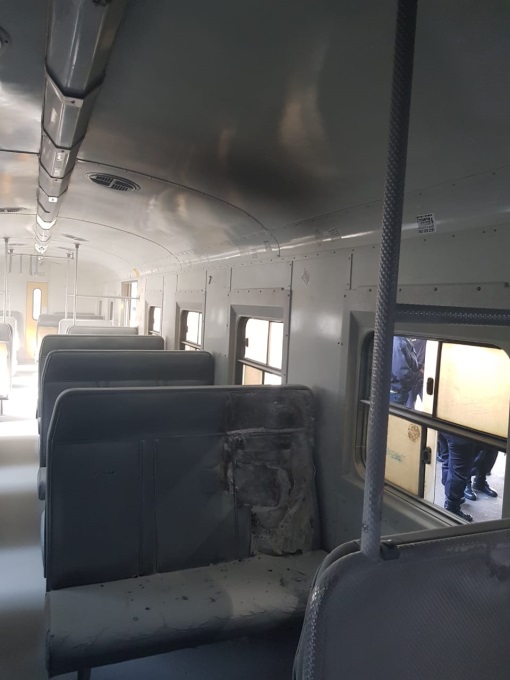 The damaged seat on a train at Cape Town station on Tuesday.
Image: Metrorail

Police arrested a suspect who attempted to torch a train on Tuesday at Cape Town station.

Metrorail said platforms 13 and 14 had just been reopened‚ following a fire that gutted two carriages on Saturday‚ when the suspect set a train seat alight. If the fire had taken hold and spread it would have been the fourth in the past 11 days.

“Employees managed to extinguish the fire set to one of the carriage seats before significant damage could be done‚” a Metrorail statement said.

“Police and protection services officials were on the scene almost immediately and managed to detain a suspect.”

Metrorail regional manager Richard Walker said: “Our employees are on high alert. Their quick action today prevented another carriage going up in smoke. The attempt happened as we were meeting with top police officers in their Cape Town control centre about the security plan.”

Walker urged commuters to be vigilant when trains approach stations and to report suspicious activity or the smell of accelerants to station or security staff. Last week‚ the United National Transport Union described the fires as “blatant sabotage”. The union’s general secretary‚ Steve Harris‚ said the commuter rail network was under strain.

“At the moment Metrorail is left with just 40 train sets of the 88 train sets needed to run a proper service‚” he said. “This means that overcrowding of trains and the delays of the service become worse with every passing minute.”

The ANC in the Western Cape called on commuters to partner with law enforcement officials to form arson watch programmes. The party’s provincial secretary‚ Faiez Jacobs‚ said Metrorail’s central line – which services mostly the Cape Flats – was the most frequently targeted.

“Arson destroys more than train carriages‚ it cripples the entire value chain of the community‚ with many people unable to go to work‚ losing daily wages‚ and ultimately losing their jobs and causing more social upheavals and further burdening their community‚” said Jacobs.

“In order to combat this problem in a sustainable way‚ we need a group of volunteers in communities‚ under civic organisations‚ in partnership with law enforcement to start developing arson prevention projects.”