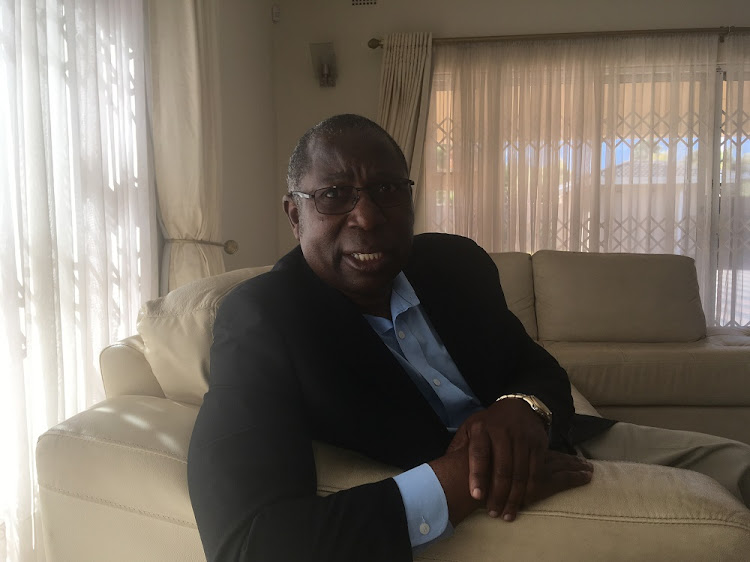 Elton Mangoma, president of the Coalition of Democrats during an interview at his Mount Pleasant home on Monday after he had voted in the country's harmonized elections.
Image: RAY NDLOVU

“If they [voters] can spend three hours or half a day queuing to get $50 in the bank‚ I’m sure they can be patient‚ even if it means they wait the whole day for them to change their lives.”

These are the words of Elton Mangoma‚ the presidential candidate of the Coalition for Democrats‚ after he cast his vote at Groombridge primary school in Harare’s upmarket Mount Pleasant suburb on Monday.

In a pair of khaki chinos‚ a navy jacket and blue shirt‚ Mangoma is among the 23 candidates in the race to be Zimbabwe’s next president.

A former energy minister‚ Mangoma was once the treasurer general of the MDC when it was led by Morgan Tsvangirai. But Tsvangirai’s election defeat in 2013 precipitated a fallout. Mangoma was one of the first senior officials to dissent from Tsvangirai’s continued leadership of the country’s largest opposition party‚ the MDC. However‚ Tsvangirai dug in and rejected calls that he must step down. Mangoma left the MDC and‚ together with Tendai Biti‚ then founded a splinter political party. That partnership‚ was however also short-lived and Mangoma and Biti soon parted ways.

That episode is now a distant memory for Mangoma‚ as he speaks to TimesLIVE from his Mount Pleasant home in Harare. He believes that the country is now on the cusp of real democratic change.

But this is not to suggest that he has no concerns for the election. Just like his opposition peers from the MDC Alliance led by Nelson Chamisa‚ he has reservations about the run-up to voting day. In particular‚ access to the voters’ roll and the ballot paper are the “problems that have littered the election process”‚ he points out.

Zimbabweans based in South Africa want to vote for change

For Bright Madaya today's election in his country will in the future determine whether he will return to SA or not.
News
3 years ago

What is his assessment of the voting process?

“So far from what I have seen and also heard is that the process is a bit slow. There is a very good turnout and people have turned out to vote in their numbers. I hope that this is happening everywhere else‚” says Mangoma.

There are 5.6 million people registered to vote. Out of these 200‚000 are first-time voters.

The opposition believes that its chances to topple Zanu-PF from power lie in a mass voter turnout that would be able to overwhelm the system. With the ghost of three past losses‚ the MDC Alliance in particular is leaving nothing to chance as it seeks to avoid having yet another election stolen right under its nose.

To fortify the win that it expects to be announced in a few days time‚ it has deployed agents to sleep at the polling stations in order to defend the people’s vote.

According to the Zimbabwe Electoral Commission there are 10‚985 polling stations across the country.

But it is an exercise in futility‚ as far as Mangoma is concerned.

“We have some agents‚ not everywhere‚ but we don’t see the need to sleep overnight. There is really nothing to guard. In the morning the processes of ensuring how many ballots are there is done; in the evening we are able to know how many ballot papers are in the box. So you don’t have to sleep over there [polling stations]‚” he says.

Opposition parties find an unlikely ally in former ruler Robert Mugabe who announced on Sunday that he would not support Zanu-PF‚ and instead has thrown his weight behind Chamisa.

Political analysts are divided over whether the support of Mugabe is a kiss of death for Chamisa. Mugabe cast his ballot at Mhofu primary school‚ amid chants of “Gushungo” - his clan name - by voters.

But Mangoma is not impressed by the last-minute support from Mugabe.

“It has been all about Mugabe and that he must be at the centre of everything. Now that he has been mistreated for the eight months he has been out of power‚ he wants everyone to sympathise with him. What of the many Zimbabweans that he mistreated for 37 years?” he says.

Mangoma smiles and says Monday’s election was meaningful for ordinary Zimbabweans all over the world.