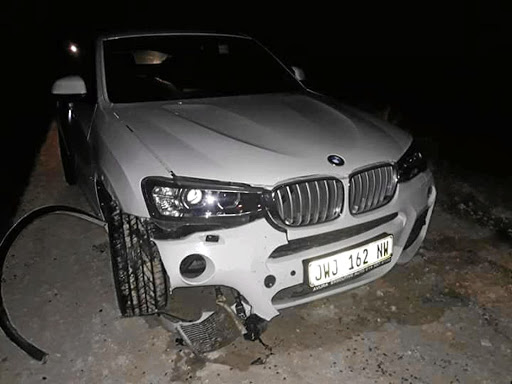 A new mayor of a North West town, Moses Olaotswe, has been accused of damaging the car allocated to him by the council while giving his alleged pregnant girlfriend driving lessons.

The incident happened on Tuesday when Olaotswe travelled from a meeting in Morokweng village back to Ganayesa.

The mayoral car, a white BMW, hit an antelope, damaging its front part.

Olaotswe said this incident has brought tension between him and his wife as the accident was now topical at the municipality.

Olaotswe was sworn in on July 20 at the Kagiso Molopo municipality after a motion of no confidence was passed against former mayor, Bitsa Lenkopane, who was accused of corruption.

The mayor said the incident had hit hard on his marriage.

"It is not nice at home, and I constantly need to prove myself that indeed I did not impregnate another woman," Olaotswe said.

"I was with my driver, and no one else [when the accident happened]. He was driving, and I was sitting on a passenger seat. There was no woman in the car," he said.

Asked why he left the scene immediately after the accident, Olaotswe said he had to rush back to his marital home as it was becoming dark.

The accident, Olaotswe said, happened in the evening. The municipal manager organised a car for him to go home, leaving the driver alone to make a police statement and to arrange for the towing of the car. Kagiso Molopo municipality manager Olaotse Bojosinyane said they were aware of the case and expected a full report from the mayor and the driver.

He said they were aware of rumours accusing the mayor of having been with his girlfriend when the accident happened.

"I understand it was a normal accident where the car hit an animal. I was told the mayor was with the driver," Bojosinyane said

The mayor added that after the accident, one MEC in the province - whose name was provided to Sowetan - told premier Job Mokgoro on Wednesday that he had damaged the municipal car while doing his private duties with his pregnant girlfriend.

Even though Olaotswe said his driver reported the case to the police, no record of the incident had been logged.

Police spokeswoman Sergeant Kelebogile Moleko said they have heard about the incident, but no case had been formally opened.