Tenants consult lawyers as house vanishes around them 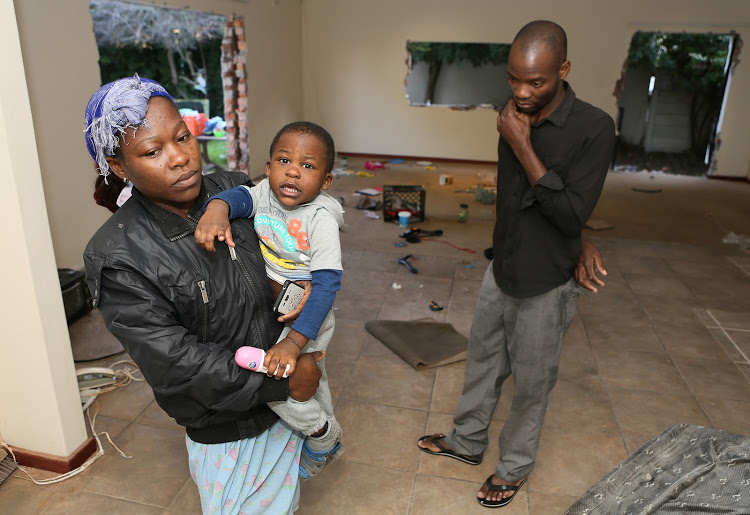 Nadla Ntseka, her husband Hugo and their child Obed cannot speak English, but they’ve spent this week at the mercy of whoever will give them a place to stay.
Image: Ruvan Boshoff

Tenants of a house in Cape Town have sought legal advice after property developers started demolishing their home.

A family and two other tenants at the Kenilworth property have taken their battle to the Legal Resources Centre after Newland Developments threatened them‚ began demolition work‚ cut off the electricity and attempted to remove an asbestos roof on a neighbouring house without the correct safety checklist in place. On Friday‚ Newland Developments co-owner Philip Nel allegedly arrived at the site and became verbally and physically abusive with tenant Nouella Zaima. He was restrained by his business partner.

Nel took photographs of Zaima and threatened to “come back for her” after she tried to record his verbal abuse. Witnesses‚ who did not want to be named‚ confirmed the incident.

“I fear for my life‚” said Zaima‚ “but I know they are trying to scare us hoping we will just move. We were renting this house‚ and we do not have a problem with moving — we just want to be given notice as per the law.” The tenants have been advised they are protected by the Prevention of Illegal Evictions Act‚ which says a court order is needed to evict a tenant. According to the act‚ “no one may be evicted from their home‚ or have their home demolished without an order of court made after considering all the relevant circumstances”. The developers have applied to build a 23-unit block of flats in Wessels Road‚ where neighbours have objected to the proposal. “Neighbours have been helping us so much at this difficult time‚” said Zaima‚ a beautician.

The tenants are foreigners legally living and working in the country and had sublet rooms from the lease holder. On July 16‚ they were awoken by a demolition team pulling out windows and doors and breaking down parts of walls.

Godfrey Nkandela‚ a computer science student who lives there‚ said: “The builders arrived and started breaking down the house. They didn’t check — they just came with machinery. We went outside and saw them chopping‚ chopping.” Nadla Ntseka‚ her husband Hugo and their child Obed cannot speak English. When TimesLIVE visited the property‚ Nadla constantly had to prevent Obed from falling into the rubble. The house cannot be secured at night because so many walls‚ windows and doors are now gone. The developers then threatened to pull the roof off. SowetanLIVE asked Nel if he had an eviction order but he refused to answer‚ warning of legal action if the website’s report was “financially damaging to us‚ including but not limited to bone (sic) fide sales that we have secured”. He refused to comment further other than to warn that he “was aware of [your] modus operandi”. The demolition continued‚ and Nel went to the site threatening the tenants with the police. Later that day‚ officers arrived but found no reason to act against the tenants.

“The law enforcement bakkie drove in‚” said neighbour June Bradbury‚ “and when I asked why they said there had been reports of vagrants. I told them there were no vagrants here — only tenants who could not be forcibly removed with no court order or fair notice. They agreed and left.” The officers then returned saying someone had told them to “ask for proof of residence to be in South Africa”‚ said Bradbury. The tenants produced their papers‚ and the officers left again.

Nel then tried to move the tenants into a small room in someone else’s house‚ but they said they wanted notice to find suitable accommodation.

On Friday‚ Nel visited the site again and allegedly verbally abused Zaima while claiming he was “trying to help”. She began recording the conversation‚ and according to witnesses “Nel tried to forcibly remove her phone from her”. Newland Developments co-owner Alex Huber then intervened and told Nel‚ “don’t touch her‚ don’t touch her”‚ witnesses said. Nel was asked to comment but declined.