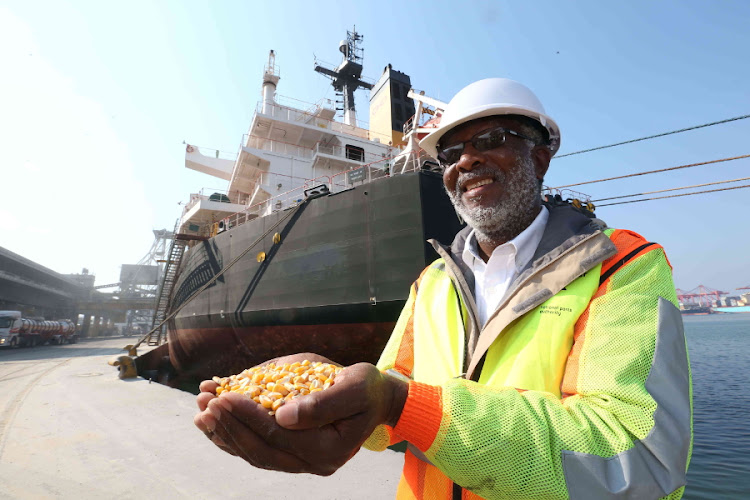 Tebogo Mongoato‚ from Matatiele‚ was part of 14 farming co-operatives from the small Eastern Cape town who participated in a joint venture between the Eastern Cape Department of Rural Development and Agrarian Reform and the Grain Farmer Development Association (GFADA).
Image: JACKIE CLAUSEN

If you think land redistribution will result in fallow farms and a ruined agriculture sector‚ think again - just give us the land and we’ll show you what we can do.

This is the message from a group of black farmers in the Eastern Cape‚ spoken just moments before their shipment of 8‚000 tons of maize left Durban’s South African Bulk Terminal for Vietnam on Thursday.

Between them‚ they farm just 2‚416ha land. But they say that more land would‚ quite simply‚ mean more crops and a greater output.

“Let them give us the land and we can prove them wrong‚” said Tebogo Mongoato‚ one of the farmers.

Mongoato‚ from Matatiele‚ was part of 14 farming co-operatives from the small Eastern Cape town who participated in a joint venture between the Eastern Cape Department of Rural Development and Agrarian Reform and the Grain Farmer Development Association (GFADA).

Mixing expropriation with Ingonyama is mischievous

"Some traditional leaders support the ANC, but the majority of them are acting like village tinpot dictators to the people there."
Opinion
3 years ago

The department invested R10m for Matatiele towards farmers’ production inputs and mechanisation‚ with the GFADA covering crop insurance‚ soil corrections‚ mentorship and finding a market for the grain the farmers produced.

In the space of 10 years‚ Mongoato has been able to take what was once a military base with 50ha of farmland and turn it into 350ha of maize bliss.

Hungry for a chance to prove himself‚ Mongoato said: “I am short of arable land that I can farm. We need government to pursue the land reform programme so that land is given to those who can work it‚ who have shown that they have interest in farming‚ so that we can be able to secure our livelihood and feed our people.

Researcher‚ activist and author Dr Crispian Olver has questioned whether the City of Cape Town has something to hide‚ after he was refused access to ...
News
3 years ago

“If I can be given an opportunity to have a proper farm‚ I will be able to produce more than what we are doing now.”

The 14 farming co-operatives were beneficiaries of land reform from GFADA.

Mongoato’s father who introduced him to farming.

“My father showed us that you would be able to live from the land. He has taken myself and eight siblings through education with farming‚ and we are here today because of it.”

Mongoato said that one of the biggest challenges he faced as a black farmer was the lack of storage facilities‚ which stopped him from being able to sell more of his crops locally.

With a son at an agricultural college‚ the father of three already has a succession plan for his children who have been very supportive throughout his 11-year farming career.

The parliamentary constitutional review committee heard on Thursday that only land belonging to white people should be expropriated without ...
News
3 years ago

“They have been part of the strife and difficulties‚ being patient enough to ensure that whatever we do‚ we do as a collective‚ we farm with them and they have given me the support throughout‚” he said.

Motivating black farmers across South Africa he said: “Let's hang in there‚ let's have patience but let's be determined to say we are able to farm and ensure South Africa’s food sovereignty.”

“The fact that these farmers are harvesting [from the Eastern Cape] and taking it straight from their fields up to here [Durban] to be shipped is an indication that if they had enough infrastructure to store this maize so that they can sell it the right time when the prices are right‚ it would be better income for them. But because of the lack of infrastructure‚ they are forced to export‚” Ntsabo said.