How to avoid and survive smash-and-grab attacks 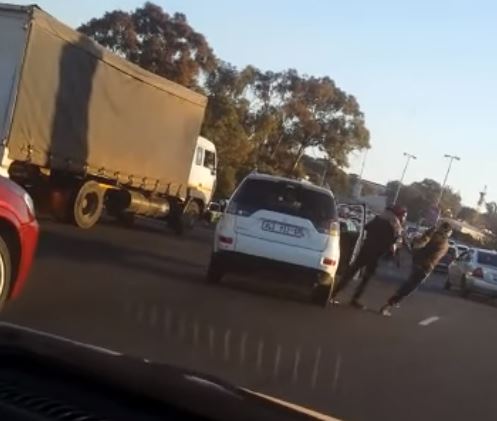 Thieves fleeing a scene with a motorist's possessions after a smash and grab attack.
Image: Screengrab / Intelligence Bureau SA

Video footage of a smash-and-grab incident during peak hour traffic in Johannesburg has ignited a furious debate about crime and why witnesses often do nothing to help victims.

The video went viral after being shared on Facebook on Thursday by Intelligence Bureau SA.

It shows two men approaching a white SUV crawling along in heavy traffic. One of the men reaches towards the driver’s side and yanks open the door. He crawls inside‚ while the SUV veers slowly to the left and‚ after an apparent struggle‚ emerges with a bag. The pair run past dozens of witnesses‚ through the traffic‚ and make their escape.

The clip attracted more than 1000 comments‚ some lamenting the state of lawlessness or asking why nobody intervened to help the victim. Others said it was too dangerous to get involved. Many wanted to know if the SUV doors were unlocked.

Casey Rousseau‚ marketing manager of 1st for Women Insurance‚ said although law enforcement agencies took steps to curb smash-and-grab incidents‚ it was largely up to motorists to protect themselves.

Rousseau offered several tips on how to avoid becoming yet another smash and grab victim:

• Leave windows open by about three centimetres to make the glass more flexible‚ allowing the window to absorb the sudden impact of an attempted smash-and-grab.

• Don’t leave valuables‚ such as a handbag‚ on the passenger or back seat as it will attract attention by criminals.

• Street intersections‚ stop signs and driveways are regarded as smash-and-grab “hot spots”. Be especially alert when stationary in a vehicle – don’t be distracted.

• When approaching an intersection‚ leave a reasonable stopping distance between you and the car in front‚ which will allow you room to manoeuvre and escape a dangerous situation.

• Keep a hand close to the hooter to alert others that you are in trouble.

• Try to approach red traffic lights at night slowly‚ so you get there as it turns green.

• If confronted by an attacker‚ remain calm‚ do not argue or make sudden gestures and avoid eye contact. But try to remember something about the person that could later be used to identify them.

• Witnesses should avoid confronting attackers as they may be armed.