Vladimir Putin arrives at OR Tambo International for BRICS summit 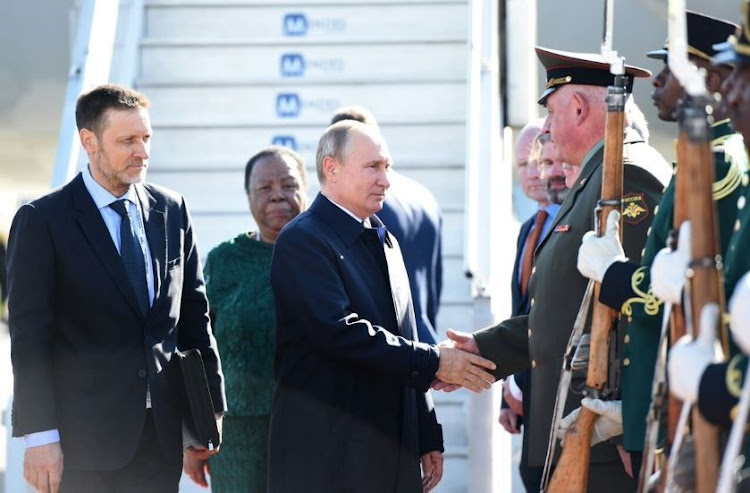 Putin touched down amid a heavy security presence at OR Tambo International. Security at the Sandton Convention Centre was also tightened in anticipation of his arrival.

The morning’s activities begin with a “family photo” with the presidents of South Africa‚ Brazil‚ China‚ Russia and India.

The leaders will then hold closed door talks before President Cyril Ramaphosa delivers an opening statement at the summit.

The other BRICS heads of state are also expected to address the summit later on Thursday morning.

The agreements which are set to be signed between emerging markets at the Brics Summit under way in Sandton, north of Johannesburg, are likely to ...
News
3 years ago

The three-day summit of the world’s leading emerging economies is being closely watched internationally‚ especially with tensions rising over the threat of a US-led trade war.

On Wednesday‚ Chinese president Xi Jinping said there would be “no winner” in global trade war‚ which has been perceived as a warning to US President Donald Trump.

"We are facing a choice between co-operation and confrontation‚ between opening up and closed-door policy and between mutual benefit and a beggar-thy-neighbour approach‚” Xi said.

“The international community has again reached a new crossroads.”

South African government officials said the Russian leader was also expected to hold one-on-one talks with Ramaphosa during his stay.