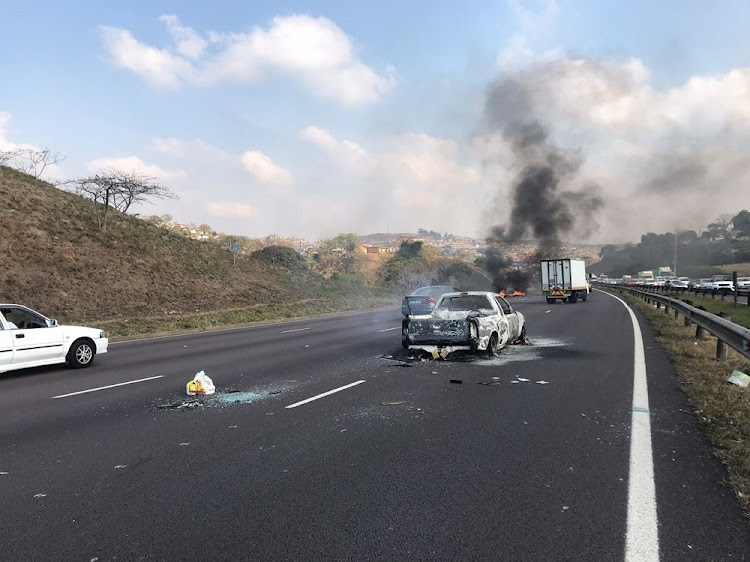 Protesters on Thursday forced the closure of the busy N2 freeway in the south of Durban as part of violent demonstrations.
Image: JEFF WICKS

Police were on Thursday afternoon engaged in running battles with protestors who have forced the closure of the southbound carriageway of the N2 near Chesterville‚ in the south of Durban.

Violent protest action has forced the closure of the N2 near Chesterville. Cars stoned, people pulled from vehicles and a bakkie torched @yasantha #N2closure pic.twitter.com/eHueCshS5x

Protestors blockaded the freeway and pulled people from their cars. They also torched a bakkie. Several other cars were damaged when they were hit by rocks and other debris hurled by the mob.

Metro police spokesman Senior Superintendent Parboo Sewpersad said the latest round of protests were related to the eThekwini Municipality’s Land Invasion Unit tearing down informal housing in the Chesterville area‚ located close to the freeway‚ on Thursday.

“Metro Police were monitoring the tearing down of the shacks when the protest erupted. Fortunately the motorist in the bakkie escaped unhurt. No other injuries have been reported as yet‚” said Sewpersad.

He said police were on the scene to monitor the situation and motorists were advised to avoid the area.

On Tuesday KwaZulu-Natal MEC for Transport‚ Community Safety and Liaison Mxolisi Kaunda said that an overwhelmed police force in the province had responded to 270 violent and illegal protests in just four months.

Kaunda was speaking at a meeting of law enforcement agencies convened in Durban.

“In the past four months 270 illegal protests have been reported in the province. What makes matters worse is that the majority of these protests become violent and result in damage to property‚” he added.

Kaunda touched on the blockading of national freeways‚ specifically the shutdown of the Mooi Toll Plaza on four occasions and the blocking and looting of trucks on the N2 in the north of the province.

Kaunda said that a committee had been established and was given a three-month window to eradicate illegal protest action.